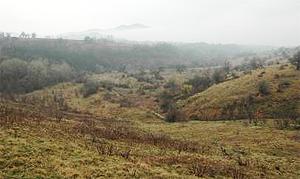 Land abandonment is observed in all grassland habitats and is pre-eminently the main threat to HNV farmland in the Western Stara Planina. The region underwent the most dramatic drop in livestock numbers in post-communist Bulgaria (over 90 %). Less than 30 % of the region’s meadows are still mowed. Abandonment of low-intensity grazing is particularly serious on grasslands at longer distances from settlements and at higher altitudes. The collapse of traditional pasturing systems has a direct negative impact on floristic biodiversity and results in a structural change from an open to a closed landscape (scrubland, forests). 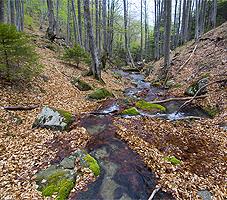 The largest part (60 %) of the Western Stara Planina is covered by forests. Half of the deciduous forests consists of beech (Fagus sylvatica, F. moesiaca), which in parts reaches ages of 100-320 years. Coppice forests with oak (Quercus frainetto, Q. cerris, Q. dalechampii) and European hornbeam (Carpinus betulus) are omnipresent in the proximity of settlements. The coniferous forests consist of some pine plantations as well as ancient spruce forests (Picea abies). Forests in the region are threatened by unsustainable forest management, massive illegal logging, quarrying, as well as plans for large-scale ski resorts.

The pastures and meadows of the Western Stara Planina are semi-natural habitats of great importance for the conservation of raptors such as saker falcon (Falco cherrug), short-toed eagle (Circaetus gallicus) and golden eagle (Aquila chrysaetos); wet meadow birds such as corncrake (Crex crex); and shrubland birds such as rock partridge (Alectoris graeca) – all priority species according the EU Birds Directive. Egyptian (Neophron percnopterus) and griffon vultures (Gyps fulvus) have already disappeared as the number of sheep (and thus carrion) has fallen.

Semi-natural dry grasslands on calcareous substrates are the most widespread grassland type in the low- and mid-mountain zones of the region. They are traditionally used for pasturing, but on semi-dry soils mowing takes place. Cessation of agricultural activity and undergrazing results in scrub invasion by dog rose (Rosa canina), blackberry (Rubus sp.), hawthorn (Crataegus sp.) or wild pear (Pyrus communis) and the subsequent loss of this important habitat (EU Code 6210). 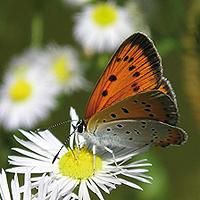 Mesophile meadows develop on periodically flooded river terraces in valleys up to 800 m altitude and are classified as Lowland hay meadows (6510). These grasslands depend on late mowing or grazing (app. 1 LU/ha) and no or limited fertilisation to conserve their floristic richness. Depending on their proximity to settlements they face abandonment, under- or overgrazing. Where they are to some extent nitrified or ruderalised, large copper (Lycaena dispar, Annex II species, EU Habitats Directive) feeds on plants such as docks and sorrels (Rumex sp.). 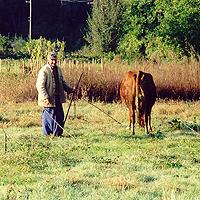 Near settlements, one can find mosaics of low-intensive arable land and orchards. They are used for the production of vegetables and fruits, and grazing takes place on fallow land and crop residues. In many places they are adjoined to riparian forests, meadows, marshland or coppice. This is a valuable habitat for certain butterfly species and songbirds, but threatened because of the limited socio-economic opportunities in rural areas. 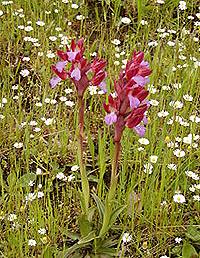