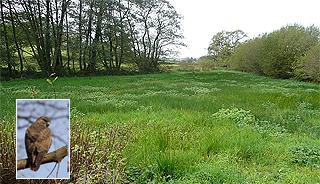 One of the main features of large parts of Wales are the hedges. In some areas they are planted directly on the ground, but in areas of wet soils, such as this, they are usually associated with an earth bank. Common species are hawthorn (Crategus monogyna); blackthorn (Prunus spinosa); hazel (Corylus avellana); willows (Salix spp.) and ash (Fraxinus excelsior). Beech (Fagus sylvatica), though not a native in most of the country, has often been planted in some of the most exposed spots. Hedges host a variety of woodland edge birds - densities of common buzzard (Buteo buteo) are very high. Along road verges in particular, they provide a refuge for meadow flora where the species are lost from the sward of the field itself. Hedge laying is still a living craft, maintaining the vigour of the hedge and its stock-proof qualities. 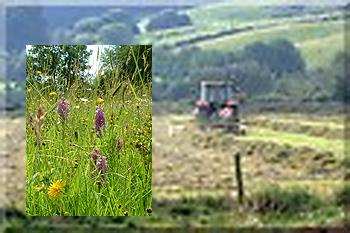 Species-rich hayfields are getting ever rarer, with many former hayfields being used solely as pasture or being used for earlier-cut silage. The move to silage reflects not only an undoubted intensification trend, but also an attempt to minimise the uncertainty of getting in a crop. Hayfield flowers include knapweed (Centaurea nigra); ox-eye daisy (Leucanthemum vulgare) and orchids such as greater and lesser butterfly orchid (Platanthera chlorantha, P. bifolia). Unfortunately the grassland type is not on Annex 1 of the Habitats Directive. 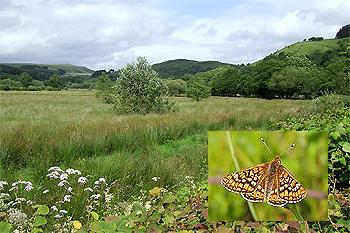 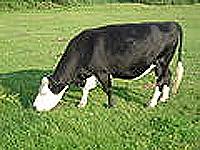 In the past a smallholding would often be measured by its carrying capacity for cattle - ‘lle un buwch’, a one-cow place, for example - and the house cow was a central part of the semi-subsistence economy. On the poorer ground the dairy industry, which came with the railways, never really penetrated. However the suckler beef system, often structured around crosses from the dairy sector, has provided an important continuity of management as ever fewer farms kept a house cow. Cattle provide an opener structure in the pasture and a rationale for hay-making. They are central to the future of a diverse mosaic of habitats and of species-rich pastures in particular. The economics of small herds are however extremely challenging. 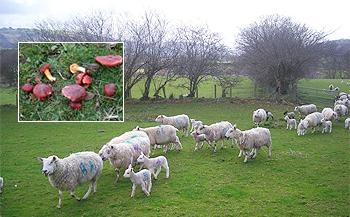 One trend which has been widely deprecated is the shift in recent years to relatively intensive sheep monoculture on many farms. More and more fields are kept in a perpetually closely-cropped state and the higher plant diversity is declining. However it is being realised that fields that have been ‘improved by grazing’ (falling within MG6 of the UK National Vegetation Classification) are very important for a range of grassland fungi, for example waxcaps (Hygrocybe spp.). These pastures have until now been seen as being of very low biological value, implying that ploughing or fertilising them is of no consequence. This viewpoint is now seen to be mistaken but this raises huge policy issues. They certainly have their place in a HNV farmed landscape, but an MG5 grassland can be rich in both vascular plants and fungi. 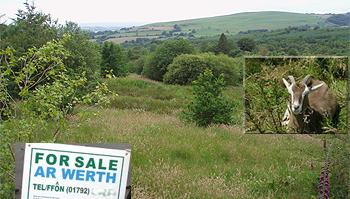 Rural Wales qualifies for Objective 1 Structural Funds - those targeted at the most deprived areas. Incomes are generally very low and in the 1970s poor land was very cheap. Hippies and others looking for an alternative life in the country flooded in in some numbers - horses, goats, llamas are not unusual sights on Welsh smallholdings Land use varies from the relatively intensive to the semi-abandoned, as here. While rural incomes remain low, the continuing demand for smallholdings has pushed up prices. Affordability is one of the lowest in the UK for all types of houses, but even a hectare of land adds 50% or more to the price. Even on average, poor land costs in excess of €10000/ha. By comparison the gross margin on suckler cattle is of the order of €200/ha, while LFA payments are a maximum of €35/ha. There is no legal imperative nor fiscal incentive to manage land outwith the CAP schemes.

Although the remnant red kite population, when it was down to very few birds, bred in the uplands (see Elenydd case study), the adjoining lowlands were always important for wintering birds. They found food on the local rubbish tip - now closed - and at the small local slaughterhouses. While some of these still survive, disposal of waste on a midden where the kites can eat it is no longer allowed by EU law. Deliberate feeding of wintering kites was started in this area by the farmer on whose land the closed tip was located and is continued nowadays by the collaborative effort of the local community - grass-roots conservation without any intervening NGO, illustrating the totemic value of the red kite to the inhabitants.