The Large blue (Maculinea arion) is a xerophilic butterfly with a very complex life-cycle. It depends on a short grass sward, so that its host ant (Myrmica sabuleti) as well as larval food plant Wild thyme (Thymus sp.) can thrive. In Europe, it has declined by 50-80 % in the last decades. In the UK, it became extinct in the late 1970s as its habitat deteriorated due to the exclusion of grazing animals. Since then, it has been successfully reintroduced. It still occurs regularly on the well-grazed Juniper-heaths of the Swabian Alb,. 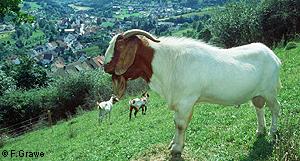 Dwindling sheep numbers have led to large-scale shrub encroachment on the valuable grassland sites. In times of reduced financial resources for habitat management, conservation authorities are looking for alternative ways to control blackthorn etc. Goats have proven very successful in maintaining a semi-open habitat structure – although the initial investment needed for fencing is high. Since in the region there is no real tradition for the consumption of goat meat, this system at the moment is not economically viable.

In comparison to the height of the Swabian-Franconian transhumance in the middle of the 19th century, the grazing intensity today is much reduced (see F&F and Information gallery “Land use change“). Therefore shrub encroachment, with species like blackthorn, hawthorn, dogwood or hazel has developed into a constant problem. In former times bushes and seedlings were controlled by shepherds. Today, shrub removal and even mowing of grasslands by hand in order to preserve important orchid populations is a costly operation carried out by conservation authorities or NGOs.

Like other members of this genus, the Mountain Alcon Blue (Maculinea rebeli) exhibits a complex life-cycle involving a specific larval food plant and host ant. Eggs are laid on the leaves of the Cross gentian (Gentiana cruciata), the young larvae feed in the flower heads before dropping to the ground. Then they are “adopted“ by ants (e.g. Myrmica schenki), which are attracted to a sweet sugary secretion generated by a gland on the back of the larva. Once carried into the nest they continue to feed on ant larvae before hibernation and emerging in the following year. 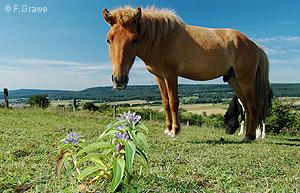 Low-intensity horse grazing can be beneficial to some species of conservation priority: these isolated individuals of Gentiana cruciata make them ideal egg-laying sites of Mountain Alcon Blue (Maculinea rebeli, see this Info-gallery). Also, the short turf offers perfect microclimatic conditions for the host ants (Myrmica sp.). The largest known populations of this highly endangered species are found on horse pastures.

Grazed, open woodlands, rich in ecotones constitute some of the most diverse habitats. Unfortunately, forestry laws abolished large-scale woodland grazing in the 19th century.
It is interesting to note that the basis for the expansion of sheep-grazing and the development of transhumance in SW Germany were the import of Merino breeding stock from Spain in the late 18th century. 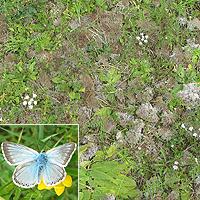 For a large part of the year calcareous grasslands look brown, bleak and rather monotonous. Only a close-up view reveals the high heterogenity with patches of bare soil, rocks, lichen and flowering plants. Livestock trampling, nutrient translocation and selective grazing behaviour are vital for maintaining this mosaic and the accompanying floristic and faunistic diversity.