Europe's hay meadows in decline - what are we losing and what can we do?
A test case for EU agriculture and biodiversity policy 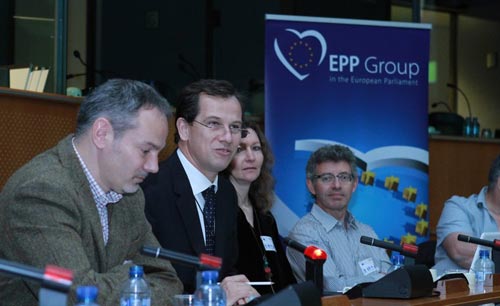 At the smaller scales, semi-natural grasslands - those which are managed by farmers - are the most biodiverse plant habitats on Earth, and many of the world record locations are in Europe. Traditionally managed hay meadows full of flowers, insects and other animal life are among the most biodiverse places in Europe and a source of joy, inspiration and beauty to all. They are a living part of our shared culture and heritage. They provide many environmental, social and economic benefits. They are protected by EU policy and subsidies. Yet they continue to disappear, through abandonment, intensification or conversion to other uses. This policy seminar discussed how European institutions can protect these treasures and support the farmers who manage them more effectively.

Hay meadows fit well with the EU's 2020 priorities - they offer resource efficiency, a low-carbon economy and inclusive jobs in marginalised communities. EU biodiversity targets (both for habitats and species and ecosystem services) mean that we MUST halt hay-meadow decline.

The miner's canary depends on the
miner, but is more sensitive than him
to changes which threaten them both.

EU has agreed the aims and provides the instruments - but not all countries are delivering. The seminar gave the example of Romania, which has a commendable and ambitious scheme for HNV grasslands, but one which needs both extending and to be better adapted for hay meadows. But other Member States are lagging far behind in using the tools provided by the EU to pursue EU priorities e.g. Spain has vast areas of HNV farming and hay meadows, but has very limited agri-environment schemes for them.

The EU institutions and governance systems do not ensure consistent effort to deliver EU priorities, or best practice - a situation which makes a mockery of EU goals and institutions. Agri-environment schemes are essential but not enough - we also need measures to support the farming systems and economy and in this context local projects make a crucial difference - they multiply the benefits of top-down schemes.

All countries should already be doing this under the Common Monitoring and Evaluation Framework (CMEF) for Pillar 2, but most are not doing it; from 2013, the indicators will apply to the whole CAP, so it becomes even more important that they are implemented. 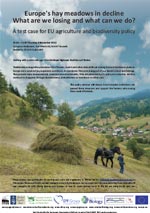 With the support of SÓGOR Csaba MEP, DG Environment and the Society of Biology UK.