Siberian milkwort (Polygala sibirica), a species only known in the Bulgarian flora since 1997, can be found on grasslands with steppe characteristics. In Rusenski Lom there is a small population of 150 individuals on an open, dry, well-drained, grassy canyon slope. Other rare plants of dry semi-natural grasslands are endemics Kovachev tagasaste (Chamaecytisys kovacevii) and Dieckian mullein (Verbascum dieckianum) as well as several orchid species. 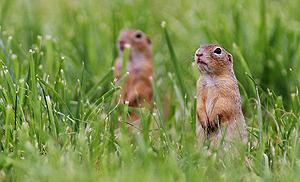 The European ground squirrel, or European souslik, is an attractive inhabitant of dry semi-natural grasslands. In the Lomovete area it can be found on the flat plateaux with loess soils on top of the canyons. Low-intensity grazing is required to keep the habitat of this EU priority species (Annex II of the Habitats Directive) free from scrub encroachment. A large part of these grasslands on fertile loess soils has been converted to arable cropland, often only leaving a narrow strip along the canyon edges. 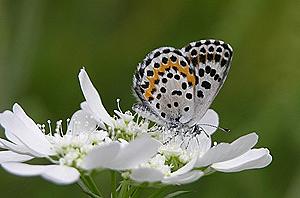 Chequered blue (Scolitantides orion, listed as vulnerable in Red Data Book of European butterflies) is a small but eye-catching butterfly inhabiting some of the open, rocky, south-facing slopes and ridges in Rusenski Lom. This habitat is classified as 6240 “Subpannonian steppes” according the Habitats Directive. At the moment, most of these sites are undergrazed or abandoned with natural succession leading to hornbeam woodland taking place.

Abandonment is the number one threat to the dry semi-natural grasslands and scrub. The post-communist rural exodus resulted in simplified farming practices. Distant grazing lands ceased to be used, leading in part to overgrazing in the immediate proximity of settlements. Burning of pastures in early spring and the spread of aggressive weeds from adjoining arable lands are other threats.

Depending on the characteristic species communities, dry grasslands fall into different habitat types: 6250 “Pannonian loess steppes” (on poor loess plains), 6210 “Semi-natural dry grasslands and scrubland facies on calcareous substrates ‘Festuco-Brometalia’ (on rocky sites)” and 40A0 “Subcontinental peri-Pannonic scrub” (scrub on loess) among others. Optimal grazing pressure for nature conservation is estimated at 0.3 to 0.7 livestock units/ ha.