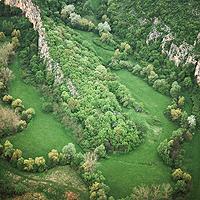 Humid grasslands are widely spread in the Lomovete area and occur on the canyon floors along the Lom Rivers. They are regularly inundated during floods and therefore rich in nutrients. Traditionally, they were a mixture of arable plots and hay meadows, but most of them are now used solely as pastures or even abandoned. The main interest of these grasslands from conservation point of view are individual fauna species such as butterflies and nesting birds like corncrake (Crex crex). 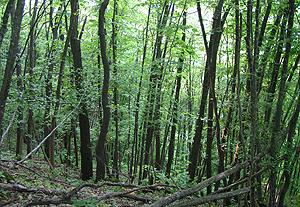 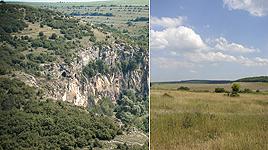 Dry grasslands mainly occur on the cliffs, slopes and canyon margins as well as on the plateaux above. Most widespread are dry semi-natural grasslands on relatively rich loess soils. Rocky steppes occur on poor and stony soils. Lastly there are significant areas of transitional habitats – bushy grasslands or open woodlands – on the canyon margins. Dry grasslands are recognized as the most valuable farmlands of the Lomovete area with several rare plant species as well as tortoises and the European souslik (Spermophilus citellus). 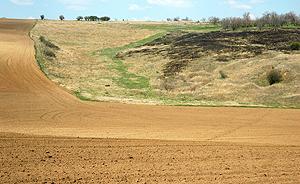 The surroundings of the Lomovete are dominated by the cultivation of cereals and industrial crops on rich, well-drained loess soils. Wheat, maize, barley and sunflower are cultivated on large-scale arable fields by big tenants and cooperatives. Unlike farming within the Nature Park, practices are intensive, including the use of pesticides, fertilisers and heavy machinery.

The Lomovete area includes 10-15 villages, surrounded by small-scale cultivation of vegetables and fruits. Villages on the canyon floors have mosaics of gardens and orchards which are regularly fertilized with nitrogen-rich deposits after flooding by one of the Lom Rivers. Their botanical value is low, but the small-scale mosaics are significant for songbirds such as red-backed shrike (Lanius collurio) – listed on Annex I of the EU Birds directive – and nightingale (Luscinia megarhynchos). 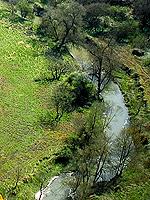