Farming in the Burren, Past and Present

In the past, livestock grazed the limestone grasslands, heaths and pavements over the winter. These areas are known locally as ‘winterages’. Livestock were moved to the more fertile lowland pastures for the summer which allowed plants on the winterage to grow, flower and set seed, helping to maintain and enhance the species-richness of these areas. The recent shift in farming systems to ones with higher nutritional requirements has led, in some cases, to the practice of housing cows in slatted sheds for all or part of the winter grazing period.

The last 35 years have seen considerable changes to the traditional agricultural systems of the Burren, especially winter feeding practices. Traditional winter feeding options such as hay, permanent pasture and rough grazing have decreased and there has been a shift to more ‘modern’ feeds such as silage. Excessive silage feeding leads to livestock activity concentrating at one point which is turns leads to the problem of point source pollution which has potential repercussions for animal and human health.

As a result of market and policy forces, most farmers have changed from keeping store cattle as part of mixed farming systems to specialist suckler beef production. Continental crosses have replaced more traditional breeds such as the Shorthorn. Calving tends to be earlier to tie in with the export weanling trade. 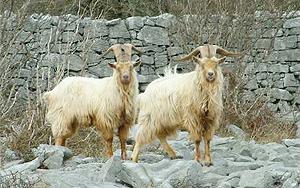 Goats have a long association with the Burren. Historically goats were an important part of the mixed farm system in the area. Today the practice has changed and very few farmers keep goats. Extensive herds of feral (once farmed, now wild) goats are seen in the region today.

The number of farmers working in the Burren has been in steady decline for many years. Farmers abandoning the Burren in search of alternative employment has led to the loss of important land management practices and knowledge.