Limestone Pavement
Limestone pavement consists of blocks of limestone bedrock, known as clints, separated by fissures called grikes. It is the key feature of the Burren landscape where it forms complex mosaics with calcareous grasslands and heaths. Limestone pavements were shaped by the erosive action of glaciers during past ice-ages and subsequent, on-going dissolution by rainwater. Soil and vegetation are sparse. A common shrub found on limestone pavements is the burnet rose (Rosa pimpinellifolia) This rarely reaches a height of more than 0.5m and is a very spiny plant with white, cream or pink flowers.

Orchid-rich dry calcareous grasslands
Widespread in the Burren, these include unimproved or semi-improved dry grasslands on thin soils that are rich in calcium. They are normally species-rich with an abundance of orchids as well as classic 'Burren' species such as spring gentians (Gentiana verna), mountain avens (Dryas octopetala) and bloody cranesbills (Geranium sanguineum). They often grade into calcareous heath.

Turloughs & Fens
These occur where depressions in the limestone landscape are intermittently flooded, mainly from groundwater sources. The water levels fluctuate markedly during the year, generally flooding in winter and drying out during the summer months. They normally fill through underground springs and swallow holes. Across the turlough basin the flooding depth and duration vary, and there may be some pools of permanent water in the centre. All areas within the normal high flood limit are considered part of the turlough habitat. Calcareous fen vegetation is associated with the springs, turloughs and lakes of the Burren. Fed by base-rich waters, they contain a variety of plants including black bog-rush (Schoenus nigricans) and many sedge species (Carex sp.). In the south east of the Burren some of the fens include greater fen-sedge (Cladium mariscus). 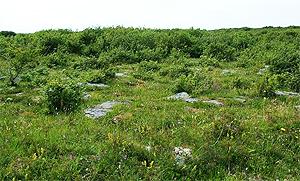 Scrub & Woodland
Hazel (Corylus avellana)-dominated scrub is common in the Burren. Other species including blackthorn (Prunus spinosa), whitethorn (Crataegus monogyna) and holly (Ilex aquifolium) are often present and are dominant in some areas of scrub. Scrub exists both as dense stands and as scattered bushes on other habitats. Whilst mature hazel scrub is an important habitat for lichens and certain fungi including the rare hazel-gloves fungus (Hypocreopsis rhododendri), its rapid encroachment onto calcareous grasslands and limestone heath is of concern. In some areas the scrub has developed, or is developing, into ash-hazel (Fraxinus excelsior) woodland.