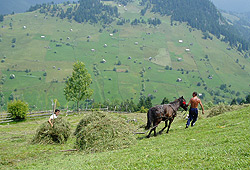 Romania’s 2.4 million hectares of semi-natural grasslands support an exceptional diversity of species. The majority of the country’s semi-natural grasslands occur in the mountain regions where the limited potential for agricultural intensification in the upland environment in combination with the political circumstances of the last century has acted to preserve high nature value (HNV) pastoralism.

Pastoralism in Romania’s mountains is typically smallholding based. There are more than 800 000 households with agricultural land in the mountain areas. Nationally, the average agricultural holding size is 2.15 hectares divided into 3-4 parcels and these statistics are also likely to be representative of average holding sizes and structures in upland areas. This type of production is variously described as subsistent or semi-subsistent and nationally 81.3 % of all holding owners consume more than 50% of their own produce.

Livestock production in the mountains is characterised by the production of hay on smallholding land and the communal herding of cattle and sheep on locally administered or privately owned pastures in the summer months. Land management practices are low in intensity and act to sustain a high diversity of plant and invertebrate species.

There is evidence that localised overgrazing of mountain pastures is detrimentally impacting the biodiversity of these habitats. Of greater concern from a nature conservation perspective is the abandonment of agricultural activity on pastures and hay meadows, a trend that has been estimated to affect 15% of the permanent grassland surfaces in Romania.

This case study illustrates how livestock production is organised in Moeciu de Sus, a village in the foothills of the Bucegi Mountains and explains the importance of smallholding hay meadows for the conservation of butterflies.