Roslagen and the Island of Gräsö – a small scale agricultural landscape in close proximity to Stockholm. 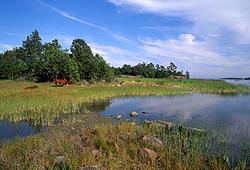 Roslagen is situated along the Baltic coast of Sweden immediately north of Stockholm. The people and nature of Roslagen have been described by many writers and songwriters and hold a special place in the heart of many Swedes.

In addition to the mainland, Roslagen has 13 000 islands, with Gräsö being one of the biggest. The island is 30 km long and 6 km wide in its broadest part.

800 people live there permanently, mainly either in small hamlets or on isolated farms. Gräsö’s population multiplies tenfold in the summertime when the townspeople move out to their second homes on the island.

Thanks to the maritime climate, the alkaline soil, the continuing post-glacial rise in the height of the land and the largely unchanged small scale agriculture practices, Gräsö has developed many species-rich habitats for birds and butterflies.