The island of Islay forms a discrete geographical entity with an area of 600 km2 and a permanent population of less than 3.000 inhabitants. It is the most southern of the Inner Hebridean islands that lie off the west coast of Scotland.

Historical developments
Scotland has a long history of livestock farming. During the 13th, 14th, 15th and 16th centuries cattle were the main form of transportable wealth; the Exchequer Rolls for 1378 show there were 45 000 hides exported that year. In the early 16th century it was reported that “many men possess as many as 10 000 sheep and 1 000 cattle” (Haldane, 1997). By the 17th century there was a well organised trade in cattle which involved the movement of large numbers annually from the distant pastures (including Islay) to the main markets in central Scotland and from there to England. This trade in cattle persisted into the 19th century. In 1777, 90 000 head were sold in Falkirk and by 1850 this had risen to 150 000 per annum (Dennis,1998).

The transhumant and pastoral-based agrarian economy that existed from the 12th century through to the 18th century was gradually being replaced by more sedentary livestock rearing and cultivation and permanently inhabited farmland. In Islay by about 1870 the present agricultural landscape and settlement pattern had largely been established (Storrie 1998) with farms being mostly mixed rearing sheep and cattle, using horses for traction and growing a range of crops of both cereals and roots, including of course by then the potato.

Despite these changes to the mosaic of cropped and cultivated ground and natural pasture, and the fluctuations in the numbers and breeds of livestock, there has been a continuity of natural pastures grazed by cattle and sheep and it is this aspect of farming that is of primary importance for the wildlife that we value today.

Grazing systems
Most farms have cattle and sheep and the breeding stock is used to produce lambs and calves that are sold on the Island through the local Livestock Mart. The traditional breeds of cattle (Highland, Galloway, Shorthorn, Hereford etc.) have mostly been replaced with the larger Continental breeds that the market demands. More and more farms are finishing lambs and calves whereas in the past virtually all production was “stores” for fattening on the mainland. There is virtually no hay grown and most of the conserved grass is in the form of silage grown in reseeded pastures which are heavily fertilised. Some cereals are grown (there is a demand on the Island for good quality barley from the Whisky distilleries) but most supplementary hard feed for livestock is in the form on bought-in concentrates. Despite this intensification and specialisation of farming, many farms are in agri-environment schemes. However, there is little or nothing in these schemes that influences the basic farming system which, as mentioned above, strongly reflects the wider market demands and trends in agriculture.

So although probably less diverse than in the past, the farmland of Islay is today still a mix of grassland and cropped land, moorland and heath, marsh (bogs and fens) and upland and coastal grassland, as well as scrub and woodland. A study of land use, bird habitats and nature conservation on Islay concluded that the vegetation and land types of Islay strongly reflect the over-riding influence of extensive livestock rearing on pastures consisting of semi-natural vegetation. In a functional context, the eight broad Island land types interlink in various combinations to provide suitable conditions for a wide variety of plants and animals. The interplay between the 'in-bye' land (close of the farm) where crops of hay, silage, cereals and roots are grown and the extensive pastures grazed by cattle and sheep throughout the year has been of paramount importance.

The long established practice of grazing cattle and sheep together to optimise plant biomass production and utilisation is central to the livestock farming systems. For instance, without the pressure of grazing cattle, the ecological and agronomic value of the Molinia caerulea grasslands, acid grasslands and heathlands would be reduced, mainly because seasonal growth would no longer be removed, dead material would accumulate and grasses (particularly Molinia) would become impalatable to sheep. By affecting the vegetation composition and structure in this way, cattle grazing also plays a fundamental role in creating the conditions needed by many plants, reptiles and invertebrates, especially butterflies (e.g. Euphydryas aurinia - marsh fritillary).

A wide variety of factors have contributed towards shaping the character of the Islay landscape and its associated wildlife. The island has an unusual glacial history and parts of the west coast may have remained ice free during the last glaciation when there was probably a land bridge with the land mass that is now Ireland. Islay has a more complex geology than surrounding areas, with soils frequently influenced by limestone and other base-rich rocks. It has a wide range of natural topography and a long and varied coastline of cliffs, raised sand and shingle beaches, saltmarsh and mudflats.

Climatically, Islay is situated in one of the most oceanic parts of Europe, with an average annual rainfall of 1300 mm in the lowland parts. On average there are over 185 raindays (1 mm or more of precipitation) per year and strong winds are frequent in winter.

The mild, oceanic climate and diverse geology result in a wide range of vegetation types including coastal grassland, vegetated sea cliffs, dune systems, heathland, woodland, moorland and blanket bogs. Three of the habitats that are especially abundant on Islay have high priority designation under Annex 1 of the EU Habitats Directive. These are as follows:

Fossilised dune systems with 'machair', occur in the western part of the island. This is a distinctive closely grazed, sand dune formation that is the result of a particular combination of climate and landform found only in western Scotland and Ireland.

The woodlands in the west of Islay are also of importance and constitute some of the most Atlantic-type woodlands found in Britain. The Salix aurita scrub woodland is an unusual woodland community and is rare in the area. Several uncommon higher plants, including Spiranthes romanzoffiana, Cirsium dissectum and Cladium mariscus occur in fens in the north-west of the island. Wetland species such as Menyanthes trifoliata, Triglochin palustrism, Pinguicula lusitanica, Narthecium ossifragum, Potentilla palustris and Linum catharticum can be found in fields with semi-natural vegetation maintained through grazing. 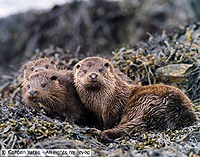 The importance of the island for wild birds has been recognised for many years. In addition to large populations of wintering Branta leucopsis (barnacle goose) and Anser albifrons flavirostris (Greenland white-fronted geese) for which it is justly renowned, Islay has a wide diversity of bird life including 108 breeding, 183 passage and 121 overwintering species. Twenty-eight of these species are included in Annex 1 of the EU Birds Directive. Examples are the two geese species mentioned above, and also Crex crex (corncrake), Aquila chrysaetos (golden eagle), Pluvialis pluvialis (golden plover), Circus cyaneus (hen harrier), Falco columbarius (merlin), Falco peregrinus (peregrine) and Gavia stellata (red-throated diver). It is thus one of the areas in Britain with highest diversity of Annex 1 bird species.

The two sea lakes (lochs) and intertidal mudflats that dissect the island are especially important for wintering geese, waders, divers, grebes and seaducks, while some of the highest densities of breeding waders anywhere in the world are found on the machair grasslands. Islay is also very important for Pyrrhocorax pyrrhocorax (chough); it holds more than 90% of the Scottish breeding population.

For more information on farming and nature on Islay, download the text-version of a presentation given by Eric Bignal at a conference in Ireland in 2008.