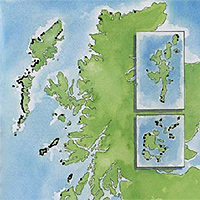 Distribution of Machair in Scotland

The spectacular displays of wild flowers in spring and early summer make a visit to the Machair grassland unforgettable. At the same time, it is one of the rarest habitat types in Europe only occuring in north-west Scotland and western Ireland. The following texts offer more detailed information on this scarcely known habitat and its accompanying use.

„Machair“ is a Gaelic word meaning an extensive low-lying fertile plain but specifically the long ranges of sandy plains fringing the Atlantic side of the Outer Hebrides. It is a coastal feature, which only occurs under certain climatic, physical and landform conditions. Sand is blown inland onto a low-lying plain (see cross section). The entire machair system encompasses a mosaic of drift-line, foredune, machair plain and transitions to saline lagoons and saltmarsh, or to calcareous lochs, acidic grasslands, fens, heath or bog. Machair grasslands largely owe their fertility to the high seashell content of the sand - sometimes as high as 90%.

Machair is one of the rarest habitat types in Europe and is therefore included in the Habitat directive (92/43/EWG). Estimates speak of no more than 25.000 ha of Machair grassland. It is confined to NW Scotland and W Ireland, with most occuring on the Outer Hebrides – on Uist, Barra and Tiree. It is only on these Islands that the traditional mixture of grazed and cultivated Machair can still be found.

How is it used?

The light, sandy and nutrient-rich soils appealed to prehistoric settlers and farmers, so human influence on the Machair systems reaches back some 4.500 years to Neolithic times.

It is believed that although agricultural methods have progressed, a vital component has remained - the use of seaweed. It acts as an important fertilizer, while at the same time binding the soil together and retaining moisture. The manure from the year-round grazing cattle also increases humus formation.

Cattle- and sheep-grazing is the typical agricultural land-use. Due to their unselective grazing, cattle improve the quality of the grassland for other grazers as well as for wildlife.

Unfortunately, cattle farming, which is labour intensive, is marginally economic and therefore declining. Sheep have increasingly replaced cattle and these are kept in fenced areas all year round. These areas tend to become overgrazed so losing most of their ecological value as well as becoming susceptible to soil erosion.

Also vital for maintaining the Machair system is cultivation. Stock is removed in May and taken to the hills for summer-grazing. The choice of crops is limited by the severe physical limitations (e.g. sandy soils) - mainly small oats and rye. Since artificial fertilizers and herbicide treatment are not worthwhile, these fields on the Outer Hebrides constitute very valuable habitats and contain a high arable diversity (see info-gallery):

Most of the conservation value and high biodiversity of the Machair depends strongly on the long-term existence of a viable crofting agriculture based on low-input shifting cultivation. There is a strong link between crofting communities and this traditional land-use. The system is sensitive to, and declining because of, agricultural „modernisation“/modification.

What are the problems?

Monitoring has shown that the conservation status of the Machair grasslands is favourable. In contrast, the arable and fallow sites are under threat. A workshop organised by the EFNCP revealed the follwing key threats: 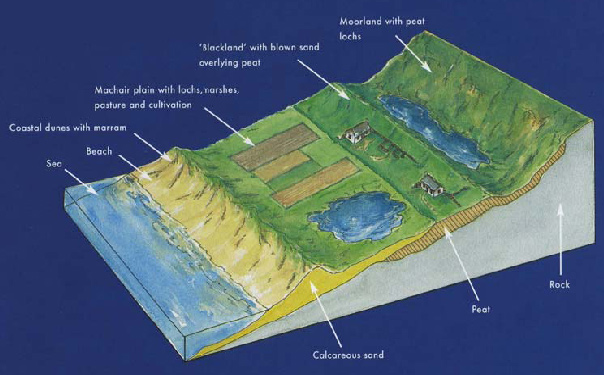