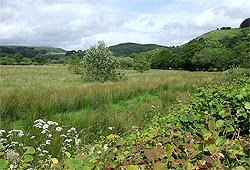 Much of lowland South Wales consists of rolling hills broken by numerous valleys, some narrow and incised, others glaciated and broad. Almost without exception, the landscape is of the ’bocage’ type characterised by a high density of hedgerows. Livestock farming is universal, with beef and sheep having by now replaced dairying on all but the best land. Forage is dominated by grass - cropping accounts for only a small proportion of the farmed area. Unenclosed semi-natural vegetation is unusual and usually takes the form of the few remaining areas of common land.

Identifying HNV farmland in such landscapes presents considerable challenges. Does it form such a small component of farms that any thought of HNV farming systems is meaningless? Is it possible or meaningful to identify distinctly HNV farmland areas which can be delimited and targeted for support?

Some parts of South Wales, while still in bocage, are turned over almost wholly to intensively managed improved grassland types. While the hedges in particular are certainly HNV features, the farmland itself is not HNV. However much of Ceredigion and the north of Carmarthenshire are underlain by Silurian and Ordovician shales and mudstones. These are low in nutrients and their soils tend to be poorly draining. In these areas wetlands and wet grasslands are still common and poor returns from farming resulted in a landscape of small farms and small fields. Similar areas occur in more or less all Welsh counties, raising the same issues.