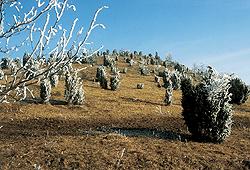 The Swabian (and Franconian) Alb is the only region in Germany where a genuine system of transhumance ever developed. It reached its highest importance in the middle of the 19th century when up to 3 million sheep were involved. It is still practised today, but numbers have fallen to only 2-3 % of the maximum.