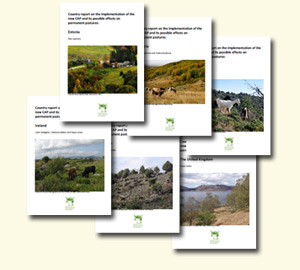 EFNCP has published new reports looking at the application of the new CAP to permanent pastures in 6 Member States: Bulgaria, Estonia, France, Ireland, Spain and UK. The overall picture is one of a fundamentally flawed EU policy model, especially for semi-natural or High Nature Value pastures, where the mainstream CAP instruments in Pillar 1 fail to address the main challenges and even exacerbate the threat of abandonment or damaging actions by farmers in some situations.

Some of the key problems in Pillar 1 (direct payments) can be corrected in part by Member States' implementation, if they have the will and administrative resources to make use of all available exceptions and clauses, and can stand up to "conformist" pressure from European Commission auditors (DG AGRI). Pillar 2 (rural development) offers many opportunities for Member States to take positive action for permanent pastures, by investing their own financial and administrative resources, for example in agri-environment-climate measures, but there is no obligation for them to do so.

The result is a mixed picture with some positive examples of policy implementation in certain Member States, but too many examples of negative policy drivers overall, and of CAP instruments for pastures that sound useful on paper but are of very limited practical benefit in reality.

Overall, there are large differences between Member States in levels of financial support to permanent pastures under Pillar 1. If Pillar 2 payments are taken into account, these differences become enormous. For example, an extensive livestock farm in the French Pyrenees can receive hundreds more euros in support per hectare than an identical farm claiming all available payments on the Spanish side of the border.

Some of the key issues highlighted in the reports include: