In France, EFNCP has been working for many years in partnership with AScA, with funding from the European Commission and French Ministries of Agriculture and Environment.

Since the first draft HNV farming map was developed for France in 2006, stakeholders have become progressively more aware that preserving and supporting HNV farming in the French context, and especially at the local level, is in their interest. More recently, HNV has been gaining visibility in the national debate with other NGOs and farmers associations, for example in relationship with PAC 2013 network.

The huge variety of French landscapes is highly related to the diversity of agriculture. As represented on the map below, type 1 HNV farming systems, mostly based on livestock breeding, are dominant in the French context, but type 2 is represented as well, even if more difficult to characterize. 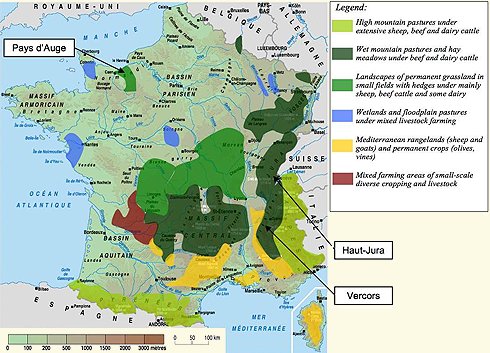 In Vercors, the study program phase undertaken since 2010 came out onto a more operational one. The Parc Naturel Régional du Vercors (PNRV) will submit a comprehensive agri-environmental development project (PAEC) for the 2014-2020 programming period. This project focuses on HNV conservation - a unique case in France - combining agri-environment payments and transversal actions directed towards land access, cheese marketing and local market actions, all adapted to the variety of situations found in the PNRV. EFNCP-AScA strongly contributed to this project, with inputs in a wider working group gathering LPO (a bird conservation NGO), CEMAGREF (a research institute), APAP (a farmers organization), SUACI (an applied research organization) and ENGREF-AgroParisTech (a graduate institute in science and engineering).

As for TYFA, 2014 was the year when the project was presented to a wider audience. In March, a meeting has been jointly organised with IDDRI, involving several key European NGOs in order to present them the project. As a follow-up of this meeting, a project core group able to lead the scenario exercise in the coming years was established. In parallel, a methodological group has been set in order to provide the project with academic input.

Three main lines of work were pursued in 2013:

France 2011: Characterisation of HNV farming at the regional scale

In 2011, the 2010 work in the Vercors was taken forward, including some theoretical work to design an ‘easy to develop’ methodology to mobilise local knowledge and complete the picture of large scale interactions between nature and farming, within a systems-focussed analysis. This methodological proposition was formalized in a document, and will be further discussed in 2012 and incorporates the findings of the work carried out in France in 2010 on HNV characterisation (Vercors, Pays d’Auge, Haut-Jura – see below). The partnership with Vercors Natural Park also resulted in the production by AScA and the Forum of a communication aimed at policy makers illustrating the most interesting results of the HNV farming characterisation work.

On November 2011, the European Forum for Nature Conservation and Pastoralism (www.efncp.org) and the OIER SUAMME organised a conference in Montpellier (France), on High Nature Value (HNV) farming in the Mediterranean context, with the support of the European Commission.

This conference was aimed at French participants involved in the field of nature conservation and agriculture, at regional or local level: civil servants, farmers, NGO’s, researchers... The aim was to dress a common picture from the local initiatives on HNV farming, launched during 2010, to discuss the results, and propose perspectives for the next years, in the context of the Common Agricultural Policy (CAP) beyond 2013.

At the seminar on "Permanent pastures and meadows" in May 2011 in Brussels, the French perspective was presented by the Forums HNV officer for France.

A brief article in Italian assessing the impact of French agri-environment schemes on HNV farming.

The case-studies in Pays d’Auge and Vercors have been undertaken within an agrarian system approach, which allows an understanding of the gradation from low nature value practices to HNV practices, both at a landscape level and across different types of farming systems. From our point of view, as presented during the Vilm conference on September, this approach leads to an accurate description of farming systems, which helps to identify policy needs to maintain HNV features.

In Vercors, the case-study has been realized in the scope of a LEADER project. The follow-up of the study has been done by a group constituted by the natural park of Vercors, LPO (a bird conservation NGO), CEMAGREF (a research institute), APAP (a farmers organization), SUACI (an applied research organization) and ENGREF-AgroParisTech (a graduate institute in science and engineering). (Oral presentation in French. Report to be transmitted). The work will go on in 2011 within the scope of the LEADER project, focusing on methodological generalization, communication and local debate.

In addition, in Haut-Jura a study (in French) with a different approach was realized at the scale of an organic cheese cooperative, to assess the links between agricultural practices and biodiversity. EFNCP was part of the follow-up group.

To feed the conclusions on these studies into the national debate, a seminar was organised in Pays d’Auge (Normandie) on December 2nd and 3rd 2010 to bring together the community interested in HVN farming in France. Amongst the participants, pastoralist groups from the South were represented, as well as the partners in a project about HNV farming in mountainous national parks (in French).

During the seminar, three workshops were organised on the following issues:

In 2009, in co-operation with AScA, a brochure on HNV farming was prepared, giving general information about the origin of the concept, the characterisation of HNV farming in the French context, and what is at stake from a policy perspective.

On October 2009, a conference directed to French stakeholders took place in Paris in order to raise awareness about HNV issues. As part of the preparatory work, a trainee was taken on to get some primary information about biodiversity and farming relationship, in 3 specific areas : Pays d’Auge (Normandie), Vercors (Rhône Alpes) and Périgord Noir (Aquitaine).

The conference was a fundamental step in HNV promotion at a time when most stakeholders did not know about the concept, One outcome of the conference was a growing realisation that the HNV farming concept could meet the needs and aspirations of some of the local and regional stakeholders involved in territorial projects dealing with agricultural development and biodiversity. It could provide both: