In 2012 and 2013 EFNCP, Civil association for sustainable use of pastures, meri and meadows and the National Association of Municipalities in Bulgaria further explored the challenges faced by the commoners by implementing the project “Enabling conditions for sustainable management of grassland habitats” funded by GEF Small Grants Programme in Bulgaria.

There are over 1.3 million ha of permanent pastures, meri (common pastures) and meadows in Bulgaria and more than half of them are of High Nature Value.

The High Nature Value of pastures and meri nowadays is a result of centuries-old common use by the inhabitants of rural settlements for grazing and feeding their livestock while complying to clear governance rules.

The main threats to the valuable grassland habitats are related to ceasing grazing and/or mowing, which lead to scrub overgrowth and loss of biodiversity and ecosystem services as well as an important feed resource for livestock farms.

On the other end of the spectrum is the complete destruction of grassland habitats by ploughing them and converting them to arable land especially in lowland areas.

Ownership of pastures, meri and meadows in Bulgaria 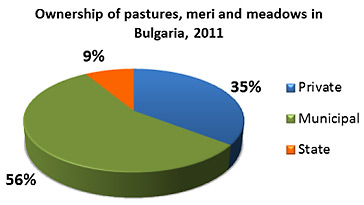 Municipalities are the biggest owner of pastures, meri and meadows in Bulgaria, including in Natura 2000 zones, and have a legally binding responsibility for their sustainable management.

Ownership of pastures and meri in Natura 2000 zones 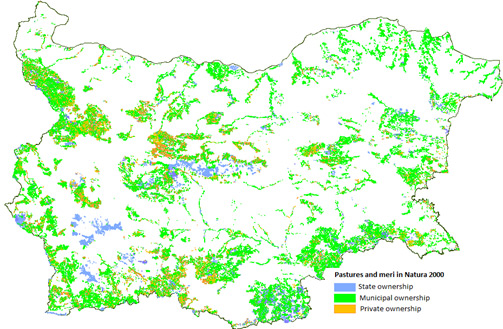 The key challenges for the governance of municipal pastures and meri:

The following studies and recommendations were developed as a result of the project workshops and experts discussions on the commons governance issues in Bulgaria (available in Bulgarian only):

EFNCP-Bulgaria is supporting the Society for Territorial and Environmental Prosperity – STEP in the implementation of its project focused on management of common pastures and meri in Godech municipality. The project is funded by EEA Grants in Bulgaria and runs for 14 months from November 2014 to December 2015.

The project aims to contribute to understanding the problems and finding solutions for the governance of municipal pastures in the Natura 2000 zones of Godech municipality. The municipality is located is Western Stara Planina and has approximately 4100 ha of arable land, 4550 ha of meadows and 10300 ha of pastures and common grazing land. The specific project objectives are:

The project shall set up a partners working group to analyse in details the situation with municipal pastures as well as to produce recommendations for improving the regulations. For this activity, the project and the team shall use the experience from the previous project on municipal pastures, which analysed the national framework and its implementation in three pilot municipalities – Dragoman, Ivailovgrad and Kurdjali.

For achieving the second objective, the project team shall engage young people as volunteers; raise their capacity and improve their understanding of nature-friendly clearing of unwanted vegetation on pastures in Natura 2000 zones.

The project foresees a number of events, working meetings and seminars during its implementation. A web-page for the organization and project will be also set up and running.