The first steps towards the identification and mapping were taken by the Ministry of Agriculture in 2007, for the purpose of offering support to the farmers in High Nature Value farming areas through the RDP agri-environment payments.

This exercise was based on 13 CORINE land cover 2000 classes, combined with data on relevant Natura 2000 sites and IBAs; semi-natural grassland communities dependent on agricultural practices; sites for triton (Triturus spp.), European souslik (Spermophilus citellus), marbled polecat (Vormella peregusna) and Romanian hamster (Mesocricetus newtoni); areas with viable tortoise populations (Testudo spp) and Prime Butterfly Areas. These data were then cross-referenced with the physical blocks in the Land Parcel Identification System. However, it did not consider the GAEC rules or the SAPS (Pillar I payments) eligibility rules. 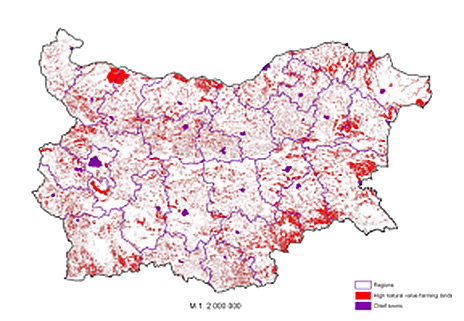 In 2008 when the Agri-environment measure was opened for the first time, there were 1400 applications. Around 400 of them were ineligible for support mostly due to land or livestock ineligibility. Another 400 (this time from the eligible 1000) got 100% penalty due to GAEC rules. This has created a lot of tension between farmers and government officials and between nature conservation NGOs and officials. In 2008 and 2009, the share of eligible agri-environment applications with no subsidy were 39% and 37% respectively.

In 2010, in an attempt to correct the land eligibility issue of HNV farmland, the Ministry of Agriculture produced a new map of potential HNV farmland eligible for SAPS payments. The new HNV maps covered 1,05 million hectars or only 65% of the original layer. This led to reduction in the share of eligible agri-environmental applications with no payments in 2010, 2011 and 2012 to 18%, 13% and 9%.

In 2013, the Ministry of Agriculture published a new map of High Nature Value areas, which seems to include both farmland and forest areas primarily in Natura 2000 zones.

All three HNV mapping experiences seem to be technical exercises without looking into the qualitative aspects of the HNV farmland and farming systems.

Bulgarian LPIS data of for February 2012 reports that agricultural land of high nature value equals 1 726 620 ha. This excludes 738 940 ha of scrub and grassland territories, which are classified as non-agricultural land.

Looking at the official figures, one would guess a flourishing development for most HNV farming systems. This is especially valid for the ones most threatened by intensification on arable land and permanent crops. Unfortunately, looking at the reports and practice for continuous intensification of land use after the EU accession, EFNCP team in Bulgaria believes that this increasing trend is a matter of technical misunderstanding of the HNV farming concept in arable areas.

The recorded development trend of HNV permanent pastures seems to be more realistic and disturbing – down to 809 530 ha in 2012 from 951 256 ha in 2007. Furthermore, in 2013 there is an additional decrease by 120 367,2 ha for just one year and only 46% of the remaining permanent grasslands are eligible for support (BG LPIS reports).

MoA Reported agriculture land of High Nature Value in 2007 and 2012.

Overall, the situation with HNV farmland identification and mapping continues to be very vague and non-transparent. EFNCP and other environmental and farming NGOs continue to ask the Bulgarian Ministry of Agriculture to initiate an open and constructive dialogue for an appropriate identification of HNV farming systems and areas.