EFNCP plays an active role in the Spanish Butterfly Monitoring Scheme. This exciting new scheme emerged in 2014 partly as a result of EFNCP's collaboration with Butterfly Conservation Europe (BCE). Previously there was only systematic butterfly monitoring in Basque Country and Catalunya, but now there is a coordinated network of transects across Spain.

One of these transects is in Garganta la Olla in the north of Extremadura, and was set up by EFNCP in 2012 with valuable help from local volunteers and Miguel L. Munguira from the Universidad Autónoma de Madrid. Butterflies have been recorded on a weekly basis from April to September since 2012.

A large part of the transect in Garganta la Olla is grazed Pyrenean oak woodland: 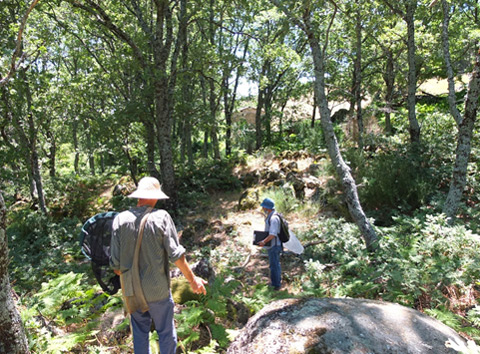 The data is fed into the Spanish BMS and thence into the BCE butterfly monitoring at European level, and also into European Environment Agency data. We are also considering how to incorporate other elements in the monitoring, e.g. plant species, and changes to land management.

One of the challenges of butterfly monitoring in regions such as Extremadura is the sheer number of species and individuals that need recording on each walk of the transect. In 2015 the total number of species recorded was about 60, the same as for previous years. Some of the notable species found in this area, and that are seen on a daily basis, include species of bushy and wooded pastures such as rock grayling (Hipparchia hermione), tree grayling (H. statilinus) and great banded grayling (Kanetisa circe); species of open clearings and forest edges, such as silver-washed fritillary (Argynnis paphia), dark green fritillary (A. aglaja) and high-brown fritillary (A. adippe); and species of semi-natural meadows such as marbled whites (Melanargia galathea), Spanish gatekeeper (Pyronia bathseba), small copper (Lycaena phlaeas), sooty copper (L. tityrus) and purple-shot copper (L. alciphron).

The data from the transect in Garganta la Olla has been incorporated into scientific research, and has illustrated the enormous diversity of butterfly species associated with grazed Pyrenean oak woodlands. Unfortunately, both the butterfly diversity and the value of grazing are largely ignored in the official documents on this Natura 2000 habitat type.

Butterfly monitoring makes it possible to assess the trends of butterfly populations and to track population changes on a range of spatial scales: local, regional, national, or European. National and regional trends are especially valuable as they can be used as indicators of biodiversity and environmental change. As butterflies are good biological indicators, they are a valuable way of monitoring progress towards the EU target of halting the loss of biodiversity and degradation of ecosystem services in the EU by 2020. The monitoring is based on standard methods that can be used in the field (Van Swaay et al, 2012).

This report explains the current situation with regard to butterfly monitoring in Europe and gives recommendations as to how it could be developed.