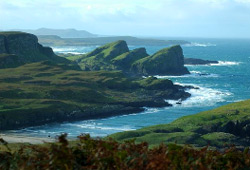 The United Kingdom is a country of paradoxes and extreme contrasts. On the one hand, it has some of the most productive farmland in Europe. It gave birth to many of the innovations and 'rationalising' tendencies of the Agricultural Revolution and was the first country where massive numbers left the country for the new industrial urban areas in the eighteenth and nineteenth century. The large, 'efficient' farms which resulted are the pride of the UK agricultural sector and are central to its self-image.

At the same time, geology and the strong oceanic influence of the Atlantic gave the UK some of the poorest agricultural land in the EU. Thousands of small and part-time farms, and not only in remote areas; significant areas of common land survive. The UK has millions of hectares of semi-natural farmland which has avoided agricultural 'improvement'. It is of global significance for many habitats of European importance, listed in Annex 1 of the Habitats Directive. While some, such as machair, are geographically restricted, others, such as blanket bogs and heaths, cover huge areas of the country.

What are the main challenges?

The challenge in the UK is the same as those facing other countries - how to make the management of HNV farmland socio-economically as well as ecologically sustainable. The wider economic signals variously make it attractive for farmers to intensify, to abandon their activities or to afforest their land, depending on the circumstance. This makes no sense for wider policy objectives - farmers who deliver those things which the public want but are not paying for in through their shopping basket should be properly supported by taxpayers so that the hard work of managing semi-natural farmland can be appropriately rewarded.

However, the challenges in the UK are made more difficult by the extreme contrasts within its farming sector, and by the long history of social and political esteem accorded to intensive farming; this is true in each of the four devolved administrations. Though presenting itself as a 'commercial' player on the World Market, it is the intensive large farm sector which receives the bulk of State support. Spending money supporting extensive farming systems and safeguarding the hundreds of years of skills and experience needed to maintain them is seen as questionable by some stakeholders and policy makers, yet there seems to be general acceptance of financing the destruction of semi-natural habitats by afforestation, as long as this only happens outwith protected areas.

The support which is given to HNV farming is hardly ever designed to favour farming systems at the level of the holding - usually it's targeted at the management of particular parcels. That means that at farm scale it's frequently uncoordinated with other subsidies and policies. Measures frequently miss their target, especially in the non-designated 'wider countryside' and, since they are also poorly monitored and evaluated, they are not timeously and appropriately amended. Meanwhile, HNV farmers are politically marginal and poorly-represented in the corridors of power.

What is EFNCP working to achieve?

Agricultural and nature conservation policy in the UK is delivered separately by the Scottish, Welsh and Northern Irish administrations and by the UK Government for England. EFNCP wants to see a coherent policy for HNV farming in each of the four countries. In the CAP that means a truly integrated programming approach which properly identifies HNV farming, its benefits and needs, targets measures at it which are appropriate both in design and scale and which monitors the health of HNV farmland and HNV farming systems, evaluates the success or otherwise of CAP measures and changes them accordingly if necessary.

In recent years, we have carried out a number of projects aimed at clarifying the HNV farming concept and improving the identification of HNV farming in England and Wales, as required for monitoring and evaluating Rural Development Programmes. The projects also looked, to a varying degree, at the needs of HNV farming and how these could be addressed, including through locally-targeted initiatives.

Subsequently, we moved on to supporting local project actions, especially to reinforce the excellent work being done by the Northern Upland Chain Local Nature Partnership.

The Northern Upland Chain Local Nature Partnership has supporting HNV farming as one of its core objectives. Having carried out a needs assessment, a process in which EFNCP played a part, it is now moving on to the implementation phase. One element is the development of results-based agri-environment measures - we supported a NUCLNP partner - the Yorkshire Dales National Park - in preparatory work for developing a pilot measure, something now being pursued through a DG Environment funded project with Natural England.

Common land is an important element in HNV landscapes and in HNV farming systems in the other parts of the UK, and one which has been, and still is to some extent, neglected by policy makers. We are therefore also active in supporting networking and applied research work on the wider UK scale. Our HNV Link work (see below) centres on the innovation needs of HNV systems using common land on Dartmoor.

Scotland is unique amongst the UK's component parts in having worked up a functional HNV farming indicator. Our work in Scotland has therefore concentrated on analysis of the effectiveness of policy measures in supporting HNV farming, and advocacy to improve these policies. We have been focussing on two overlapping subsets of HNV farming, namely crofting and common grazings.

In Northern Ireland, we have not yet embarked on any major projects. However in 2011 we collaborated with a local charity - the Vaughan Trust - to run a hay meadow competition in County Fermanagh, an area with the highest density of species-rich meadow communities in the whole of Britain and Ireland. Click here for further reports: Report 1, Report 2. In 2013 we hosted an HNV farm visit for policy makers and farmers, in collaboration with RSPB

The situation of permanent pastures and meadows in Northern Ireland is summarised in a case study, which is part of EFNCPs publication: "Permanent Pastures and Meadows under the CAP: the situation in 6 countries"

In 2012 EFNCP and LUPG (the UK Land Use Policy Group) held a joint seminar in London on 18th June to consider the future of HNV farming policies in the UK, in support of which we produced a booklet, part-funded by the Stapledon Trust, and a summary of the seminar's policy conclusions.

Current projects in the UK

Our most significant work in the UK at present centres round the HNV Link project and the Dartmoor Learning Area.