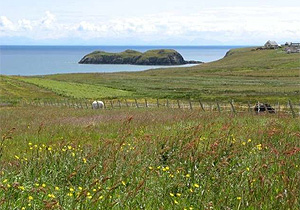 In 2012 we carried out an analysis of the extent to which the current RDP has supported a particular sub-group of HNV farmers - crofting smallholders in the Highlands and Islands. Our report on the issue is the first such major investigation of this topic, despite the lip service given to the environmental importance of crofting by various stakeholders. It shows that uptake of schemes is poor, especially when compared with participation rates in some intensive farming areas. The report also demonstrates how advisory support to producers is crofting and other marginal areas is much lower than that on offer in the lowlands, where public goods delivery is much lower.

We are working to achieve a better result for land management by crofters in the 2014-20 RDP. As part of this work, we gave a presentation to the Cross-Party Group on crofting in the Scottish Parliament.

Previous work on crofting includes our workshop in Uist.