HNV farming in the North Pennines 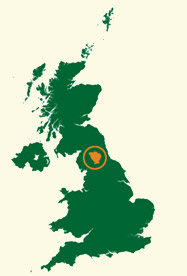 The North Pennines Area of Outstanding Natural Beauty (AONB) and Global Geopark is a distinctive landscape of high moorland and broad upland dales in the North of England. One of the most remote and unspoilt places in England, it lies between the National Parks of the Yorkshire Dales and Northumberland, with the former West Durham Coalfield to the east and the Eden Valley to the west. The AONB contains 40% of the UK's upland hay meadows, 30% of England's upland heathland and 27% of its blanket bog and 80% of England's black grouse as well as key sites for arctic alpine plants and 22,000 pairs of breeding waders.

As part of a wider HNV farming collaboration across the Northern Upland Chain Local Nature Partnership , EFNCP and Cumulus Consultants were commissioned by the North Pennines Area of Natural Beauty (AONB) partnership to carry out research to: 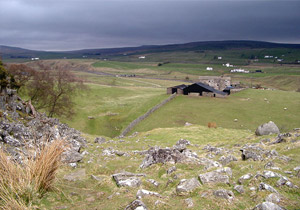 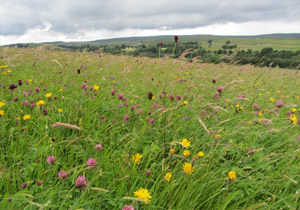 The research focussed on three areas of the AONB - Upper Weardale, Upper Tynedale and Upper Teesdale - totalling around 100 km2 or about 5% of the AONB area. These areas were selected as they support some of the best examples of North Pennines habitats and their associated wildlife, which in turn are known to be associated with traditional, low intensity farming.

Having interviewed around two dozen farmers and drawn interim conclusions, the team held a meeting where these were presented back to the farmers:

The final report concluded that if 'viable HNV farming' is to be a meaningful phrase, the system must remain rational to the farmer, whether from the social, economic or agronomic perspective.

Against this background and in the light of the very high levels of ecosystem services which the area continues to provide, there were a number of concerns arising from the farmer interviews: 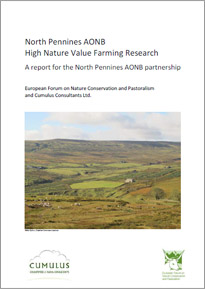 The report made recommendations for action, only summarised here. These were at three scales - some should be carried out locally at local initiative; others, while they are best carried out locally, should ideally fit within a national framework. Some changes can only be implemented nationally, but the AONB, hopefully strengthened by an ever-improving relationship with local farmers, should be able to make informed comments on Government proposals on a range of issues.