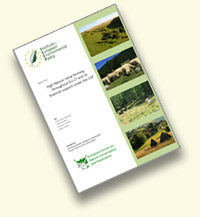 The European Commission has published a major new report entitled High Nature Value farming throughout EU-27 and its financial support under the CAP. The study was led by IEEP with EFNCP and its network of experts playing a major role.

In 2005-6 the 27 Member States approved a new EU rural development policy and a monitoring system with indicators to check that the policy was delivering its goals. Under this policy all the governments made explicit commitments to support HNV farming through their Rural Development Programmes (RDP) and to monitor progress using indicators under the Common Monitoring and Evaluation Framework (CMEF). This study aimed to assess how far they have got with delivering these commitments.

A key finding of the report is that with the current EU system of data gathering and reporting on RDP implementation it is impossible to know how much support is being directed towards HNV farming in a given Member State or region. When reported to the Commission, measures and expenditure are not broken down in a way that distinguishes between schemes that support HNV farming or biodiversity on farmland, and other schemes for example to reduce consumption of irrigation water. The problem is especially acute in the case of federal Member States with numerous regional RDPs.

This is not a problem only for HNV farming, the same issue applies for biodiversity and nature conservation generally. With the exception of bird species, EU level data on the extent and condition of farmland habitats and species is extremely poor, and data on the implementation of measures to conserve them through RDPs is even poorer. How will the Commission ever know if the Biodiversity Strategy targets have been achieved? Unless data and reporting systems are improved it will be impossible.

Against this backdrop, the study team did as much as possible to assess current levels of policy support for HNV farming. The picture for RDPs seems to be one of great inconsistency and with very little European cohesion. A few Member States have explicit and quite ambitious programmes to support HNV farming on a large scale, especially through agri-environment schemes. Romania is one example. But at the other extreme are Member States who have only very marginal schemes that affect only a tiny percentage of HNV farmland. Spain is one example.

Similarly massive variations exist in the way that the CAP Pillar 1 direct payments and payments for Areas with Natural Constraints are implemented. In some countries these are quite supportive of HNV farming while in some countries large areas of HNV farmland are excluded from receiving these payments, or the payments or so small as to be of little use in supporting farming activity. The report also gives examples of situations where HNV farmers would be much better off if they stopped farming altogether under the current policy system. Yet the CAP continues to provide massive payments to certain farming types with high environmental impacts such as tobacco or irrigated olives.

On the CMEF indicators for HNV farming, the report finds that progress has been extremely slow overall. A few countries and regions have made considerable progress over several years since 2006, while some others have only recently begun to take the task seriously. However, by now it seems that in all Member States there has at least been some work to develop indicators of the extent of HNV farming and there are several working examples including Austria, Germany, Navarra (Spain), Portugal and Scotland, using a variety of approaches that could be extended to all regions.

Economic pressures have caused and continue to threaten the abandonment or intensification of large areas of HNV farmland, with irreversible loss of the associated habitats and species of European importance for biodiversity. HNV farming is essential if the EU is to meet its 2020 biodiversity targets, but the policy context of recent years has not halted the decline of HNV farming. As a whole, the EU has failed to deliver on its 2005-6 commitments to support and monitor HNV farming. This report provides important pointers to what needs to be done to ensure better progress under the new policy cycle. There are clear examples of good practice from certain countries and regions, the question is how to get the large number of poorly performing Member States to raise their game to the level of the few that are showing the way forward.


Back to news overview