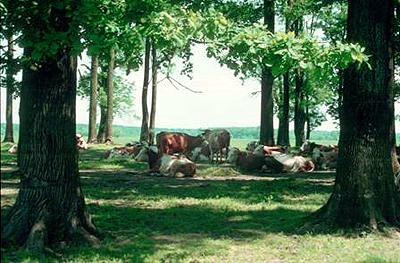 Badly designed policies can cause enormous damage and waste massive amounts of public money, as has occurred for many years under the Common Agricultural Policy (CAP). Our goal is to turn this situation around.

But policy work is not the most glamorous and certainly not the easiest activity for us to finance. The practical benefits often are not clear for potential funders who are attracted more by projects focused on conserving a particular species or landscape.

What does this work involve? It means digesting and interpreting a lot of legislation, consulting with EFNCP members and other partners, learning from the experience of local projects across the network and converting all of this information into coherent proposals for policy improvement.

To get our messages across to policy makers, we participate in 8 different Civil Dialogue Groups on the CAP organised by the European Commission, as well as in environmental working groups. When we have sufficient funds we organise seminars on key issues in the European Parliament, and conferences in rural areas to bring together local practitioners and policy makers.

By far the most powerful policy affecting our rural environment is the Common Agricultural Policy (CAP). The CAP costs the taxpayer almost 60 billion euros per year, equivalent to around 175 euros paid by each EU citizen of working age every year.

For each hectare of farmland in the EU, the CAP spends about 330 euros per year. In our opinion much of this money is wasted on income payments to big, intensive farms that don't need public money and produce very few public benefits in return for their huge subsidies.

There are some potentially very beneficial environmental measures available under the CAP, but they have limited funding and some national and regional governments make very little use of them. However, sadly nobody knows the full picture of how measures are used because the whole system of monitoring and evaluating the environmental effects of the CAP is woefully inadequate.

We are working to make better use of CAP funds, so that they are used to pursue real public benefits rather than just subsidising the agri-food industry. There is still a long way to go since the 2013 reforms [see Assessing the new CAP] and there are powerful vested interests blocking the path. EFNCP's strategy is to focus on specific areas of policy that can be improved, where we have specialist knowledge and where we can make practical proposals and lobby for change. [See semi-natural pastures]

EU policies for the environment don't have the financial resources of the CAP, but they have ambitious objectives for conserving our common natural heritage and resources such as biodiversity, water and soil. Farming has major impacts on natural resources and EFNCP believes that EU agricultural and environmental policies should be closely co-ordinated and mutually supporting.

Most of European farmland biodiversity is found within High Nature Value (HNV) farming systems, so the continuation of these systems is crucial for the EU's goals on nature conservation [European biodiversity goals] . Semi-natural grasslands are the main farmland habitats targeted by Natura 2000 (Birds and Habitats Directives) and these grazing lands and the livestock systems that maintain them provide wider ecosystem services, such as managing water catchments and reducing risks of damaging wildfires [see wildfires section]. They are therefore also central to the EU's targets for maintaining and restoring ecosystems and their services under the Biodiversity Strategy [biodiversity policy].

EFNCP contributed to the European Habitats Forum's response to the proposed Biodiversity Strategy, in particular proposing to strengthen the recognition of HNV farming as a key element in ensuring the delivery of the new targets.

EFNCP has developed leading expertise on the design and workings of policies affecting semi-natural grasslands, including policy instruments that aim to protect them such as the Environmental Impact Assessment Directive. This is part of our wider work on permanent pastures.

The role of farming (positive and negative) in climate change is a complex subject and we need to evaluate the overall impact of different farming systems, taking into account many factors such as carbon sequestration (and losses) in farmland soils, the role of extensive pastoral systems in reducing the risk of wildfires and the importance of semi-natural vegetation on a landscape scale for the resilience of both agriculture and agriculture-dependent biodiversity to climate change.

Some policies take an over-simplistic view of the issues, for example the new CAP gives all permanent crops (olives, vines etc.) an automatic "green" payment because of their supposed carbon storage properties. This is not the result of science but of political lobbying from certain governments and interest groups. The carbon balance of permanent crops depends largely on how the soil is managed and many olive plantations have highly eroded soils with very poor carbon content. Vast areas of olives are in urgent need of additional elements of vegetation ("ecological focus areas" in CAP language), just as the most intensive arable land is. [See olive section]

Concerning energy crops, EFNCP responded to the consultation by DG Energy on the Renewable Energy Directive (see EFNCP response). This Directive excludes energy crops planted on certain land types from being counted towards a country's carbon targets, and if well implemented it should prevent the subsidisation of such crops on high biodiversity farmland.