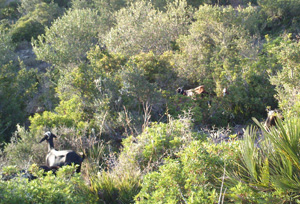 EFNCP has sent a letter signed by 60 Spanish organisations to the European Commission complaining that thousands of Spanish farmers who traditionally graze their animals on pastures with trees and shrubs are faced with seeing their rights to direct payments on this land reduced or eliminated altogether, as a result of the system of rules being introduced under the new CAP. The issues are explained in a new report produced for the Spanish Paying Agency FEGA by the Spanish Platform for Extensive Livestock Systems and Pastoralism in collaboration with EFNCP. The report (extract, full report) presents many situations from different regions in which productive pastures with trees and/or shrubs and with clearly established farming use and exceptional environmental values are being penalised by the system of CAP eligibility being applied by the Spanish authorities.

European Commission Auditors (DG AGRI) are driving this problem by forcing Spain to take a more restrictive approach to allowing CAP payments on pastures with trees and shrubs (16 million hectares in Spain). A 300 million penalty has already been imposed to Spain, together with a warning of the risk of losing their CAP budget for ALL pastures (around 18 million hectares). The Auditors seem unwilling to take into account the specific conditions of Spanish pastures with trees and/or shrubs and of the extensive grazing systems that use them. As a result, the Spanish authorities are putting in place a much more restrictive policy, including drastic reductions in woody pastures eligibility and converting large areas of land previously categorised as "pasture with trees" into the "forest" category. The latter is not eligible for CAP support.

Yet the latest CAP regulations make very clear that all vegetation, whether herbaceous or woody, is fully eligible for CAP direct payments if the vegetation is grazable and accessible to grazing; and that only non-productive elements should be deducted from a parcel's eligible area. DG AGRI Auditors seem to be encouraging a system that conflicts with the regulations and which could drive farmers to clear tree and shrub habitats from their pastures to avoid losing eligibility. The undesired consequences would be losing pasture productivity and degrading the environmental value of pastures.

With the new restrictive policies, pushed by DG AGRI auditors, both these Pyrenean oak woods are classified as "forest" and excluded from CAP direct payments. EFNCP agrees that dense woodland with no grazing (picture on the left) should not receive these payments, but grazed wood pastures (picture on the right) should remain fully eligible: they constitute a key pasture resource for farmers and provide numerous environmental benefits. ©Photos: Carlos Lanchas.

In one of many grassroots response, more than 100 farmers have written to the authorities of Castilla y León asking for a change in policy and warning that grazing land taken out of the CAP will become "dead land", as there will be a disincentive to use this land in future. Most farming unions are also complaining about the inappropriate application of the CAP eligibility rules. And European authorities (MEPs and the EC) have been warned of this unfair situation through the EFNCP.

This situation threatens to drive the abandonment of pastures of high environmental value, including Natura 2000 habitats that require active grazing for their conservation, as European Commission reports recognise. It will be impossible to achieve Natura 2000 objectives if pastures with trees and/or shrubs are not adequately supported by CAP direct payments. Moreover, lack of grazing will also contribute to a widespread increase in the wildfire hazard, with accompanying carbon release and soil erosion.

EFNCP considers that supporting grazing in Spanish high nature value pastures is essential for reducing the risk of devastating wildfires such as the one that recently destroyed over 8,000 hectares in Sierra de Gata (Extremadura), including expanses of Pyrenean oak woodland. Our studies also show that grazing is an essential tool for conserving these habitats, which host butterfly species such as rock grayling (Hipparchia hermione), tree grayling (H. statilinus) and great banded grayling (Kanetisa circe).

EFNCP believes that all land that complies with the CAP definition of Permanent Grassland and is in active grazing use, as defined by national/regional authorities, should be fully eligible for CAP direct payments. Only truly non-productive elements should be deducted from the eligible area. The presence of trees and/or shrubs per se, even at high densities, should not put into question the eligible area of a parcel if the land is being used for active grazing as part of a productive livestock holding.