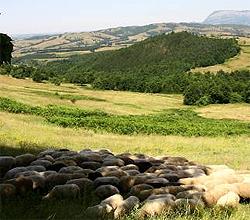 The Western (Zapadna) Stara Planina region covers a total area of 4.043 km2 of which 2.099 km2 are in Bulgaria and 1.944 km2 are in Serbia. It is a mountainous area with exceptional natural richness and biological diversity. From a socio-economic perspective however the region is classified as less-developed and constitutes one of the poorest areas of Europe.

This showcase deals with the Bulgarian part of the Western Stara Planina, which is a Natura 2000 site and a proposed Nature Park. About 60 % of the region is covered with forest while the rest is farmland, more particularly grassland. Some is natural (primary) grass vegetation (alpine or high mountain pastures, riparian meadows, stony and rocky terrains), the rest is of semi-natural character (secondary grasslands), shaped by man after the removal of the forest cover.