Rocky slopes at high altitudes provide a limited grazing resource, and are not used as such since livestock numbers collapsed. Rare plants such as Androsace obtusifolia (a rock jasmine) can be found, as well as the rare and threatened butterfly false eros blue (Polyommatus eroides). According to the EU Habitats Directive, these areas are classified as “Silicate rocky slopes with chazmophytic vegetation” (8220).

Dry to temperate humid grasslands at an altitude between 1.000 m and the tree line are common in the Western Stara Planina and classified as 6520(EU Code 6520: Mountain hay meadows). They are relatively productive semi-natural grasslands as they develop on well-moistened soils, with good forage qualities and a vegetation period of up to 6 months. They are appropriate for hay-making, but nowadays are more commonly used for pasturing or abandoned. Their deep soils provide good nesting opportunities for the European souslik (Spermophilus citellus) and its predator the marbled polecat (Vormela peregusna). 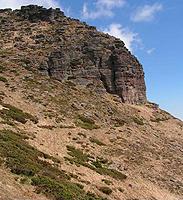 The most widespread high-mountain grassland type in the Western Stara Planina are the Nardus grasslands which occur above the tree line on siliceous, dry and poor soils. Large areas of these alpine pastures are dominated by mat-grass (Nardus stricta), a grass with relatively low nutritional qualities. They have a great floristic diversity, and are classified as “Species-rich Nardus grasslands, on siliceous substrates in mountain areas” (6230) according to the Habitats Directive. Grazing at low stocking densities is necessary to maintain the habitat, but they face undergrazing and abandonment.

Alpine heathlands occur on shallow (<10 cm) and stony soils, and often also as patches in mat-grass pastures. They are classified as “Alpine and Boreal heaths” (4060). These heathlands are dominated by European and bog bilberry (Vaccinium myrtillus, V. uliginosum) and broom species (Genista depressa, G. sagittalis). Siberian juniper (Juniperus sibirica) is a low shrub which in the past was removed by shepherds by burning. Nowadays it is recolonising its former habitats as livestock numbers dropped and remote pastures were abandoned. 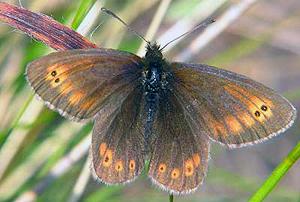 The Bulgarian ringlet (Erebia orientalis) is an endemic butterfly of Bulgaria and Serbia. In Bulgaria it is confined to the alpine grasslands of Stara Planina, Rila and Pirin above 1.400 m, often in the proximity of the tree line. 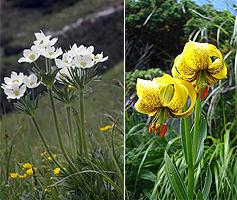 Narcissus anemone (Anemone narcissiflora), spotted gentian (Gentiana punctata), great yellow gentian (Gentiana lutea) and a lily (Lilium jankae), not only occur in temperate-humid mountain hay meadows, they also listed in the Red Book of Bulgaria. Mowing or grazing at low intensity is necessary to maintain their habitat in a good condition.