Life in the shepherd camp

Long-distance transhumance. In Romania, the term transhumance is applied in literature to long distance seasonal movements of livestock. Shepherds more commonly refer to being ‘on the road’. Long distance transhumance is becoming rare in Romania but was formerly common in the county of Brasov although is most often associated with mountain villages in the county of Sibiu.
Men and boys from Moeciu de Sus were hired as transhumant shepherds in the first part of the 20th century and before by the large land owners in the locality some of which owned 3-4000 sheep. Flocks pasturing in and around the Bucegi Mountains during the summer headed by foot 2-300 km to the floodplains of the Danube in the south east of the country where they grazed land rented from the local parishes. The confiscation of land and livestock in the Brasov area during communism put an end to many of the transhumance flocks. The restitution of land since the end of communism has made it difficult for remaining flocks to find passage between the mountains and the winter pastures.

Short-distance transhumance. Short-distance transhumance (pendulation) is a necessary phenomenon in Moeciu de Sus due to the absence of pasture land in the immediate vicinity of the village. Livestock are communally herded during the summer months on one of four local mountain pastures. However, the number of livestock in the village exceeds the capacity of these four pastures and some smallholders send their cattle and sheep to lowland pastures. 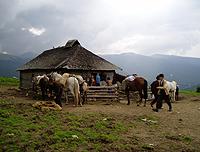 Shepherd camps. Shepherd camps normally consist of a rudimentary wooden hut with two to three rooms mostly dedicated to the production of cheese. The shepherds sleep outside either in small wooden box shelters or in the open wrapped in a large sheepskin cloak. Shepherds endure storms on the upland pastures and frequently have to defend their flocks and herds, with the help of dogs, from the attacks of bears and wolves. 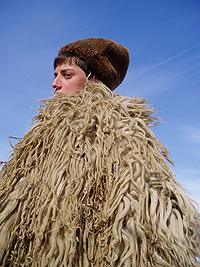 Shepherds. The head shepherds that rent the upland pastures local to Moeciu de Sus employ a further six or so men for specific herding and cheese making tasks. Some of these men will be hired only for the summer grazing period (June 1st-October 1st) and others will stay on in the spring and autumn to herd the sheep in the lowlands. Shepherds work very long hours in often arduous conditions and have few opportunities to take leave and visit their family.
In Moeciu de Sus the wives of the head shepherds may resupply the summer camps and deal with the day to day administration liaising with livestock owners but remain for the most part in the village to make hay. The families of head shepherds often raise sheep and keep horses and consequently have a larger area of meadows than most villagers.
The hired shepherds are a mixture of local and non-local men. Head shepherds report an increasing difficulty in employing men who are skilled in shepherding. Shepherds can earn the same income in jobs with better working conditions (e.g. in the building trade). 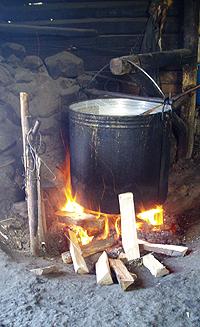 Cheese production. Each shepherd camp has a ‘baci’, a shepherd specifically responsible for the production of cheese. This may be the head shepherd who leases the pasture or it may be a hired shepherd. The baci is normally assisted by a young teenage shepherd who is responsible for menial tasks such as fetching water.
The main cheese produced on the high pastures near Moeciu de Sus is brânza de burduf and is made from a mixture of cow and sheep milk. Milk is heated in large cauldrons over a wood fire in the shepherd hut. The curds are used to make an immature hard cheese called cas which is left for a period of 10 days in wooden containers made from slats of wood held together by wire or for less time if warmer. The cas is then cleaned, processed through a hand operated mincer and salt is added to produce brânza. At this point it may be wrapped in cleaned pine bark, a tradition local to the Moeciu area, or wrapped in a cleaned stomach.
A cheese called telemea is less commonly made in the local shepherd camps. This is similar to feta cheese and is moist as more of the whey is retained. Telemea is more difficult to transport and keep and for this reason, is typically made in the lowlands.

Pasture vegetation . Mat grass (Nardus stricta) dominated vegetation communities cover significant areas of Bucegi pastures. Also present are plant associations containing red fescue (Festuca rubra) (Agrosti-Festucetum rubrae and Trifolio-Festucetum rubrae) and pastures typified by the presence of Festuca supine.
There is a long history of livestock grazing on the pastures of the Bucegi Mountains with documented evidence dating from the 1500s. More recently, ecologists have raised the concern that overgrazing is occurring on steep slopes in the Bucegi Mountains that were formerly ungrazed before the post-1989 rise in sheep numbers. However, sheep numbers have been decreasing in the locality of Moeciu de Sus.
26% of the Bucegi Natural Park is comprised of pasture. Only one of the three upland pastures used by the villagers of Moeciu de Sus is within the confines of the Bucegi Natural Park boundary.

Forests. There are records of at least one obste in the village, a form of common pool resource management in which members would have the right to harvest a certain percent of timber. Obsti ceased to exist during communism when forests were nationalised. Upland communities lost an important source of fuel, timber and marginal grazing resources.
Many villagers still collect pine needles from the forest floor to use as litter in barns. This practice is becoming less common now that sawdust is readily available from one of the three sawmills in the village. In the past, tree branches would also have been lopped to provide bedding. A few villagers still possess the skills necessary for constructing the hay barns and making the pine tiles that traditionally formed the cladding and shingle roofs of barns and houses. 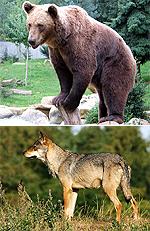 Large carnivores. Brown bears (Ursus arctos) are known to venture into meadows and gardens in Moeciu de Sus though are rarely sighted. Some smallholders have armoured hay barn doors with protruding nails to prevent livestock being taken but this is a rare event in the village.
However the predation of livestock by bears and wolves (Canis lupus) whilst they are herded on the summer pastures is a common occurrence. Shepherd dogs are used to defend livestock from these attacks but few flocks and herds remain unscathed during the course of the summer.
Romania holds 30% of the European populations of large carnivores: 5 600 brown bears, 3 000 wolves and 1 500 lynx (Lynx lynx).