Deciduous trees were pollared to increase winter fodder for sheep and cattle. Ash was the most commonly used, but birch, whitebeam and lime (Tilia sp.) were also pollared. The pollared trees became favoured as nesting sites for birds and bats and a popular habitat for large number of insects, moss and lichen. In one specific village on Gräsö 2000 pollared trees survive.

As new agricultural practices, artificial fertilizers and modern seed were introduced to farming on Gräsö, the meadows were put under the plough. Today only small remnants remain. For the last 10 years there has been a project on Gräsö to encourage landowners to manage their meadows in the traditional way. The Uppland Foundation (owned by the councils and regional authorities in Uppland) lends out small, old style single-axle mowers to landowners who wish to mow small meadows. 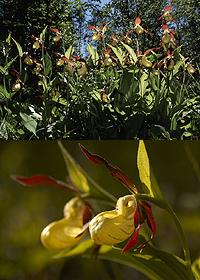 Small patches of semi-natural vegetation between the fields and meadows act as a refuge for many farmland species and increase the overall diversity of the landscape.
After a phase of severe intensification in the 1960s some of the arable fields are returning to their former species richness.