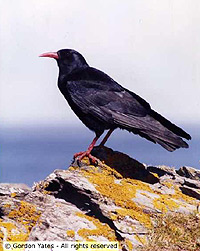 
What is the distribution?

World & Europe
The global range of the Chough extends from the European Atlantic coast in the west across mountainous areas of southern Europe and central Asia, to India and China. There are isolated population in the Ethiopean Highlands and in Morocco.

Although the overall species range is very large, the actual distribution of Chough is highly localised – especially in Europe. In Britain and Ireland, where it reaches its north-western distribution edge, it is essentially a coastal species, while in more central European countries (e.g. France, Switzerland, Austria, Italy, Greece) it occurs in mountainous landscapes. Only in Spain is the species more widespread.

As a result of the large and patchy/scattered distribution, several subspecies of the Chough have evolved, three of which occur in Europe: The nominate P.p. pyrrhocorax is restricted to Britain and Ireland, P.p. erythrorhamphus occurs in Spain, southern France, the Alps and Italy and P.p. docilis is found on the Balcan, Turkey and the Middel-East.

UK
Restricted to the west coast of Wales and Scotland as well as the Isle of Man, with only a few pairs remaining in inland parts of north and central Wales. It became extinct in England (Cornwall - where it appears in the Cornish Coat of Arms) in 1948. Amazingly, in 2005 the Chough recolonised Cornwall.
Total population estimated at 450-500 pairs (Birds in Europe 2004). While the Welsh coastal population seems to be stable, there is concern about the inland sites in Mid-Wales as well as in Scotland.

Scotland
In historic times, Choughs were more widely distributed in Scotland, occurring in more northern areas, farther inland and on the east coast (e.g. St. Abbs in 1578, by 1867 they were reduced to a single pair). Although their abundance during this early period remains obscure, it is clear that there was a significant reduction in distribution during the 19th century, which appears to have been in two stages. First, a contraction to the (mostly) western coasts and islands by about 1835 and second, to the Argyll islands of Islay, Jura and Colonsay by the end of the century. Various theories have been suggested to explain this contraction, the most plausible being a combination of persecution and severe winter weather.
Over the last 40 years, there have been more complete population estimates. In 1963 the Scottish Chough population was estimated at 70 individuals confined entirely to Argyll, including 11 breeding pairs and a flock of 47 on Islay (Rolfe 1966). In 1976 the number in Islay was estimated at 153-158 birds including 39-41 breeding pairs (Ogilvie 1992). Since 1982, censuses have been carried out at ten-year intervals (Table).

The recent losses from Kintyre, Mull and Jura left the entire Scottish population restricted to Islay and Colonsay (except one mainland pair outside Argyll).

How do they live in SCO?

Choughs nest in caves and recesses in cliffs or in suitable buildings. Breeding pairs defend a home range of varying size and remain there for most of the year, roosting at or close to the nest. Pre-breeders (sub-adults) form flocks that roost communally both on cliffs and in buildings.

Choughs feed predominantly on arthropods, principally soil-living, surface-active and dung-associated invertebrates. Their preferred foraging areas generally being grasslands of various types: particularly favoured are sand-dunes, sand grasslands and machair as well as agricultural grasslands including leys, old pastures and meadows, permanent grasslands, both acidic and calcareous, as well as a range of rough grazing areas, moorland grassland and dwarf-shrub heaths.

During the winter on both Colonsay and Islay, Choughs are found foraging along the strand-line of sandy beaches, especially where seaweed has been covered by sand, and in places where arable silage or grains have been fed to livestock. Also utilised are silage and hay aftermath during late summer and cereal stubble in autumn. Clearly, most of these foraging preferences are associated with farming, especially the rearing of sheep and cattle.

Nest building begins in March and egg-laying starts in early April. The most frequent clutch size is five (smaller in first-time breeders). Between 1992 and 2004, breeding success (the number of young fledged from nests) in Islay varied from 1.29 to 2.62. The average was 1.76 for 1992-1997 and 2.29 for 1998-2004. Eggs hatch asynchronously after 21 days and the first young leave the nest after six weeks, but the fledglings generally stay in the cave or building for another week before joining the parents on the home range. Within three or four weeks the parents escort the young to the communal roost.

It is at this time of the year (late July-early August) that the highest numbers are recorded at the roost, although breeding pairs soon return to their home ranges and leave fledglings to fend for themselves. Most pairs mate for life and several birds are still breeding in their teens, although breeding success declines with age after about ten years. The oldest known birds are paired, a 20 year-old male and a 23 year-old female.

Between 1982 and 2006, over 1 200 Chough nestlings were individually colour-ringed in Islay resulting in several thousand re-sightings, which have been used to describe the annual cycle of behaviour (e.g. Bignal et al. 1997). Most birds spend their first two years as members of a “sub-adult-flock”, foraging together and using the main communal roost. Once established as breeders, the pairs stay close to their nest site and home range throughout the year, roosting at or close to the nest. During January and February, adjacent breeding pairs join together in small foraging flocks, apparently sharing home ranges. The function of these pre-breeding “alliances” is not clear but, with the onset of egg-laying, the behaviour changes and pairs become strongly territorial and intolerant of other Choughs, both in the home range and near the nest site.

Choughs are highly social birds and it seems that “Choughs need other Choughs”. For the young, the limiting factor for survival may be not just the availability of resources but also the opportunity to learn survival and foraging skills from others.

Why do they need HNV-famland?

The Chough's bill is specialised for digging and probing for invertebrates, and habitat preferences reflect this. It requires a range of habitats where invertebrates can thrive and are available year round. In Scotland these places are associated with relatively low-intensity pastoral livestock farming in areas of high natural diversity, mostly near the coast. The resulting vegetation and land-use mosaics produce a wide variety of feeding opportunities and prey items.

Some of these are natural, such as rocky outcrops in pastures, sand dunes with larvae of the Mining Bee, ant-hills in old grasslands and fly larvae in rotting kelp on sandy shores. Others are anthropogenic, such as cereal stubble and long-rotation unfertilised pastures, as well as the “micro-habitats” and untidy features associated with the agricultural landscape. The latter include earth banks, field clearance cairns, old walls, middens and even livestock burial areas.

Such features have been lost in the more intensively farmed parts of Scotland. The importance of extensive livestock rearing is difficult to over-emphasise; it restricts vegetation growth and so provides the access to bare ground that foraging Choughs need. In certain situations, particularly on sand dunes and limestone grassland, cattle dung can provide a rich source of easily located invertebrate food. Cultivation of animal fodder, especially cereals and arable silage (and their aftermath) creates supplementary feeding opportunities during winter.

Changes in distribution and numbers in recent years are difficult to attribute to land management. However, the low-intensity, extensive pastoral farming and the abundance of natural and man-made nesting sites are crucial to Choughs. However, these do not explain why so much apparently suitable habitat is unoccupied, for example on Mull. Neither can it explain the recent increases in Colonsay. Nor can the expansion, contraction and then recovery in Islay be explained by land-use change, management-practices or nest site availability.