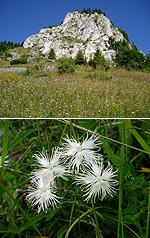 Geology and soils. Acid brown soils that have formed from crystalline schists are interspersed with more localised patches of thin rendzinas forming on calcareous conglomerates.
Calcareous cliffs, screes and protruding rocks are scattered through the Moeciu de Sus landscape. Grasslands in these locations are generally sparse and unmanaged. These areas provide a stable breeding habitat and feeding resource for butterflies in the second half of the summer when the majority of meadows have been mown and may harbour ‘source’ populations of species such as the small blue (Cupido minimus) which can disperse and colonise patches of more ephemerally suitable hay meadow vegetation. Such bare, rocky areas also provide a warm sheltered microclimate and often harbour species of butterfly such as the large and mountain alcon blue which are dependent on ants that thrive in warmer conditions. 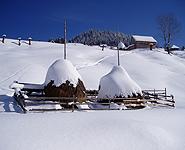 Climate. Romania has a continental climate characterised by significant differences in temperature between the summer and the winter. Temperatures as low as -23 °C and as high as 28.7 °C have been recorded in Moeciu de Sus. Precipitation in the village is less than 800 mm per year and snow cover can last between November and March. 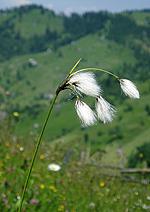 Springs. Springs provide a vital supply of drinking water for both people and livestock in the village. The small-sedge plant communities occurring in Moeciu de Sus have been identified as belonging to the Caricion davallianae plant alliance reflecting the base-rich chemistry of the spring water. Spring vegetation is usually mown and without active management would become overgrown with species such as willow. Two charismatic plant species commonly found in these areas include the early purple orchid (Orchis mascula) and butterwort (Pinguicula vulgaris).

Importance of meadow mosaics in the landscape. The landscape of Moeciu de Sus is a fine-scale patchwork of small parcels of meadow interspersed with pockets of more natural calcareous and wooded habitats. There are a minimum of 450 parcels of meadow in Moeciu de Sus each managed in subtly different ways sometimes resulting in abrupt changes in vegetation communities at fence lines.
Subtle variations in the management of meadows (reflecting household structure and labour capacity and the topographical characteristic of the constituent meadows that constitute a smallholding) create the conditions where species with contrasting requirements can exist in the same landscape.
For example, a lightly dunged meadow may contain a mat grass (Nardus stricta) dominated sward and the Romanian Red Listed species mountain arnica (Arnica montana) which only occurs at low levels of fertility. In contrast, a neighbouring meadow may receive a higher level of dung and may be carpeted by globe flower (Trollius europaeus) which is also a Romanian Red Listed species.

Vegetation diversity within meadows. Variations in the vegetation communities within meadows can be caused by changes in the natural environment e.g. soils forming from different parent materials or the presence of a spring. Management factors can also introduce variation. The area in the immediate vicinity of the barn generally receives higher levels of dung reflecting the effort needed to carry heavy buckets by hand on steep slopes. This pattern results in lush but relatively species poor grass dominated swards near the barn and more species rich and sparse swards in the furthest areas of the meadow.
Hoof prints also create small scale variations in the vegetation of a meadow and provide the opportunity for species such as kidney vetch (Anthyllis vulneraria) to flower where their seedlings would otherwise be unable to establish. 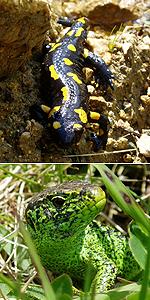 Amphibians and reptiles. In addition to butterflies and other invertebrates, the meadows are home to a number of amphibian and reptilian species.
Frogs, toads and newts are common whilst the fiery salamander (Salamandra salamandra) is normally only seen in wetter weather particularly near forest edges.
Slow worms (Anguis fragilis) and sand lizards (Lacerta agilis) occur in the meadows as does the rarely seen common adder (Vipera berus).