Butterfly diversity. Butterfly larvae feed on one or more specific plant species. The larval host plants of butterflies occurring in semi-natural grasslands often require nutrient poor conditions and are unable to exist in conditions of higher fertility and high levels of disturbance (e.g. repeated mowing and high grazing intensity). For this reason, certain assemblages of butterflies can act as sensitive indicators of the condition of semi-natural grasslands.
Forty-six butterfly species have been recorded in the hay meadow and calcareous scrub habitats of Moeciu de Sus. Nine of the recorded species are highly mobile and may not breed in the area. The remaining thirty-seven species almost all certainly breed in the meadows and calcareous scrub grassland given the presence of their larval host plants and their less mobile nature. The high number of butterfly species reflects the high plant diversity of the semi-natural meadow and scrub grassland habitats which also provide adult butterflies with nectar resources and shelter.

Butterfly flight periods. Butterfly species emerge at different times of the summer reflecting the temporal patterns of their larval host plants. The small blue (Cupido minimus) only lays its eggs on kidney vetch (Anthyllis vulneraria) which flowers mainly in June in Moeciu de Sus. The small blue is accordingly abundant in June and early July but disappears in late July and August. In contrast, species with larvae that feed on grass species, for example, emerge later in the summer. The larvae of the marbled white feed on a variety of grass and the adults of this species fly predominantly in August in Moeciu de Sus. 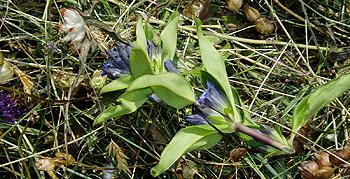 Mowing and butterflies. Mowing causes the mortality of immature butterfly stages and reduces the breeding and feeding resources of adults. The meadow brown (Maniola jurtina) was the only butterfly recorded laying eggs in recently mown meadows in Moeciu de Sus.
Mowing is therefore a destructive event for butterfly species at the level of the meadow. However, there are several hundred separate parcels of meadow in Moeciu de Sus. These are mown at different times within the hay cutting period (early July to late August). At any one point in time in the landscape there is unmown meadow habitat.
Late cut meadows, fallows and unmanaged calcareous scrub grasslands provide an important resource for later emerging butterfly species such as the silver spotted skipper (Hesperia comma). The regrowth of the earliest cut meadows also provides a nectar resource in late summer.

Landscape scale conservation. The small blue (Cupido minimus) is one of the least mobile butterflies in Europe and specialises in laying its egg on a single species of host plant, the kidney vetch (Anthyllis vulneraria). Kidney vetch seedlings thrive on calcareous soils where vegetation swards are sparse. In Moeciu de Sus the distribution of this plant is limited to rocky calcareous grasslands and lightly dunged hay meadows with calcareous soils. Populations of specialist species, particularly those which are less mobile such as the small blue are particularly vulnerable to extinction when the host plant declines in extent.
Local extinctions of butterflies can occur when a patch of habitat becomes unsuitable. If a meadow containing kidney vetch receives a higher level of dung, the plant is likely to be out competed by species that thrive in higher nutrient levels. The population of the small blue that occupied this patch will become extinct. However, the species exists in a metapopulation: spatially separated populations of the same species from which individuals can be disperse and colonise suitable patches of habitat. The small blue is able to re-occupy the meadow if the management once again favours the occurrence of kidney vetch.
Many species of butterfly have declined elsewhere in Europe because the fragmentation and isolation of habitat (and absence of suitable management of habitat remnants) have disrupted the functioning of metapopulations. Landscape scale conservation is therefore necessary for the maintenance of metapopulations and for the maintenance of species with contrasting ecological requirements.

Management intensity and butterflies. Increasing intensity in meadow management is strongly negatively correlated with a decrease in the number of butterfly species recorded. This relationship reflects the earlier mowing of meadows that are managed at a higher intensity and the subsequent removal of breeding and feeding habitat. It is important to emphasise that in Moeciu de Sus all meadows are managed at a low intensity with only light applications of dung and a maximum of two hay cuts per summer using scythes. In most cases, only one smallholding meadow is managed for two cuts of hay per summer. The other meadows are cut once and provide an important grazing resource in the autumn. 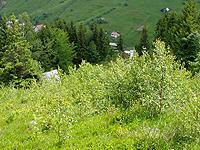 Abandoned meadow. Recently abandoned meadows provide a stable habitat breeding and feeding habitat for butterflies in the absence of mowing but quickly become overgrown with silver birch (Betula pendula). This process may take less than ten years.
Semi-natural grassland plants and butterflies decline as birch begins to dominate the vegetation of a meadow but stands of this tree species are important for night flying moths. The area of unmown meadows has increased in the village in recent years predominantly because an elderly person is no longer able to work the land and has no children that are willing or able to take over the management of the meadow.