Moeciu de Sus is located at an altitude of 1000 m in the foothills of the Bucegi Mountains. Over 230 smallholdings, each on average less than three hectares in size, cumulatively own 700 hectares of hay meadows. These cover the steep hill slopes that rise up from the settlement to an altitude of 1200-1300 m. 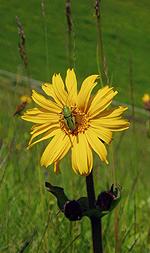 The village meadows harbour a high diversity of plant and invertebrate species.
Eleven different plant communities and twelve plant species listed as rare or vulnerable on the Romanian Red List of Vascular Plants including globe flower (Trollius europaeus) and mountain arnica (Arnica montana) have been recorded in the hay meadows of Moeciu de Sus and the neighbouring village of Fundata.

Forty-six species of butterfly have been recorded in the village hay meadows and the pockets of unmanaged calcareous scrub that intersperse the managed parcels.
Three of these species are classified as vulnerable on the Red List for Romanian Butterflies: the dingy skipper (Erynnis tages), purple-shot copper (Lycaena alciphron) and the mountain alcon blue (Maculinea rebeli).

Species of butterfly that are rapidly declining elsewhere in Europe, including the small blue (Cupido minimus), are still abundant in the meadows.
Cross gentian (larval host plant of mountain alcon blue) 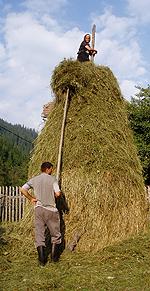 The combination of low levels of nutrient inputs (in the form of light dunging) and the moderate level of disturbance introduced into the habitat by mowing (by scythe) encourages the existence of a high diversity of plant species.
The existence of several hundred small parcels of meadow managed at a low-intensity but in subtly different ways (e.g. timing of mowing, level of light dunging etc) in combination with natural variations in soils introduces heterogeneity into the hay meadow habitat.
This heterogeneity in vegetation composition and structure ensures that plant and invertebrate species with different ecological needs can be accommodated within the hay meadow landscape.

In essence, the high nature value of the smallholding is a consequence of the semi-subsistent nature of the livestock or pastoral production system.
A smallholding family’s primary concern is to produce sufficient milk, cheese and, to a lesser extent, meat for their own needs. They have neither the motivation (in most cases at present at least) to intensify production through the application of agro-chemical fertilisers etc nor the means in terms of capital.