Smallholding size. The amount of land that a household manages reflects their labour capacity and the purpose of the smallholding, in most cases, to produce food for the table rather than for the market. Household size and labour capacity therefore dictates the number of livestock that are kept and the area of hay meadows that is managed. The number of livestock cannot exceed the supply of hay because there are insufficient funds to buy supplementary feed other than small amounts of wheat husks and maize meal which are fed to milk cows and ewes at calving and lambing.
In Moeciu de Sus a family of four active adults with four milk cows may work five hectares of meadows in five parcels whilst a household of one elderly person with one milk cow may have two hectares of meadow divided into two parcels. A smallholding’s meadows are rarely contiguous in their location due to patterns of tenure created by inheritance, marriage and straight sale.

Meadow size. The size of a hay meadow parcel is measured in terms of the number of people that it takes to mow the meadow in a day. This roughly equates to three to four people per hectare. Higher meadows are generally larger (2 hectares or more) than those on the lower slopes (less than 2 hectares). Lower meadows are often cut twice per summer.

Labour. The grandparents of a family often contribute the most labour to the management of the smallholding labour on a daily basis with adult children helping out when their paid employment allows. Tending to the livestock in winter may take up half a day. In the autumn and spring cows may be watched over whilst they graze for most of the day.
Hay making requires a high input of labour with as many family members helping as are able. Relatives who have left the village may even return to help with hay making. Some villagers who are short of time and financially able employ itinerant hay cutters to mow their meadows. These hay cutters are commonly Romanians from poorer areas of the country or ethnic Roma.
Many households have switched from using pine needle and forest litter to sawdust to cover the floors of the barns for reasons of convenience. A family with five barns collected 73 sacks of pine needles and earth (each weighing as much as 20kg) and this equated to an input of 10 days of labour. This family also used 20 sacks of sawdust. Few families have the time and will to continue to collect forest litter when sawdust is readily available.

Otava. This is the name for the second more nutritious cut of hay that is fed to cows and ewes in the spring. Normally, only one of the smallholding meadows (generally the lowest) is managed for the production of otava but people also mow the area around the barn where more dung has been applied in upper meadows. 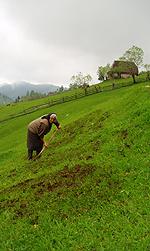 Dunging. The amount of dung that is used to fertilise a meadow is determined by the number of livestock that are sheltered in the meadow’s barn over winter and the duration of their stay. The quantity produced is rarely enough to fertilise a whole meadow in any one year and the different areas of a meadow are lightly manured on a rotational basis. Dung is raked by hand.
The physical effort required to lift heavy buckets of dung out into the meadow often means that the area in the vicinity of the barn often receives more dung and may be cut twice even if the rest of the meadow is only cut once. 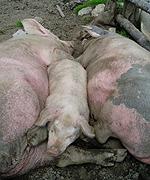 Pigs. Many households buy piglets early in the year to fatten and slaughter just before Christmas. The pigs are fed household scraps and, if grown, the leaves and roots of turnips and smaller potatoes. Pigs are slaughtered at home on very cold days and very little of the carcass remains unused. The head is used to make brawn, the intestines are washed and used as sausage skins and fat may be used to make soap. Meat is cooked and sealed in fat and stored in large airtight glass jars.

Vegetable growing. Small fenced-off plots cultivated for the production of vegetables can still be seen in Moeciu de Sus but are becoming less common. Potatoes, turnips and beet are grown although the potato crop has failed in recent years. Carrots, celeriac, salad onions, lettuce, herbs and the larger potatoes are kept for the kitchen. Smaller potatoes, turnips and beet are fed to pigs along with household scraps. The leaves of the turnips are fed to the pigs in the autumn.
Otherwise, vegetables and fruit are sold directly to villagers from the back of vans on an ad hoc basis during the summer months or villagers can purchase them at the nearest two shops, 8km away, or at markets further afield. Fruit such as apricots, cherries and melons is only available in season and people look forward to the first tomatoes of the year grown in the lowlands of the country.
A few villagers pick blueberries (Vaccinium myrtillus) on the surrounding hill slopes and sell them at their gate. These are often used to make afinata (similar to schnapps). St John’s Wort (Hypericum perforatum) and yarrow (Achillea millefolium) are picked to make medicinal teas. The young leaves of nettles (Urtica dioica) and cabbage thistle (Cirsium oleraceum) are picked and cooked in the six week period of fasting before Easter.

Home cheese making and pickling. Cheese is made at home between October and January and again after calving in March until the cows leave for the summer pastures. An immature cheese called cas is produced and may be smoked. The whey is used to produce a soft cream cheese called urda or is fed to pigs if kept.
In the autumn villagers bulk buy red peppers and baby cucumbers for pickling. Families take pride in their pickling recipes which may include celeriac, bay leaves and horse radish. Twenty kilos or more each of red peppers and baby cucumbers may be pickled and are often the only vegetables that are eaten during the winter months.
Orchards are less common in Moeciu de Sus than at lower altitudes but where grown apples may be stored for eating or used to flavour tuica (similar to schnapps and commonly home distilled).