Irish lady´s tresses (Spiranthes romanzoffiana) is one of Europes rarest orchids. Occuring mainly in North America, its European distirbution is restricted to peaty pastures and marshes grazed by cattle on the islands of Colonsay, Coll and Barra. This strange distribution is something of a scientific mystery. One theory states that seeds are carried to the Hebrides from the USA via Greenland by migrating geese. 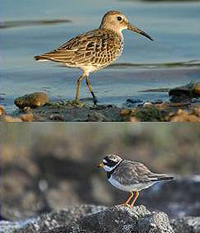 Machair is most famous for ist impressive numbers of breedings waders, like lapwing, redshank and oystercatcher. Each species exhibit distinctive preferences for different parts of the Machair system:
Dunlin require tufted vegetation in the wet machair in order to hide their nests. Record densities reached 300 pairs/km². Uist and Tiree hold 40% of the British population.
Ringed plovers depend on the traditional cropping patterns. It prefers dry cultivated machair – about one third of Britain’s population are found on the Uists. Interestingly, the local birds remain throughout the winter – the only non-migratory population worldwide!

The biologically most productive grasslands are the unfertilised hay meadows. Because production is much lower than in the reseeded, fertilised fields these old meadows are floristically rich (up to 45 plants/m²) and have a large number of insects associated with them. 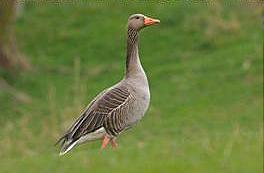 Not only do large numbers of migratory geese arrive for the winter (see Mixed farming, Islay) – both Inner and Outer Hebrides have a native breeding population of greylag geese numbering at present several thousand birds.
For the individual crofter, the grazing pressure of this population can prove to be very troublesome (see F&F). In the Outer Hebrides where the problem is greatest, a Goose Management Committee has been formed to address the issue.