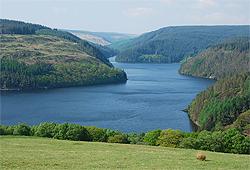 The Elenydd is the recently resurrected name for the large upland block which forms the backbone of central Wales. A dissected 500-600m plateau roughly 60km long and 20-30km wide, the lack of a genuinely current name illustrates how little the wider population on both sides of the watershed either know or value it. Its function as a divide has been strengthened in the 20th century by the exodus of most of its farming population, so that it now separates an essentially monoglot English Radnorshire and Breconshire from the Welsh heartland of Ceredigion.

Pastoral farming has been taking place on the Elenydd since prehistoric times and the area was a source of cattle for the markets of lowland England. Large areas were granted to the Cistercian monastery of Strata Florida, which is credited with introducing extensive sheep farming. In the second half of the 20th century, cattle farming finally ceased, while sheep numbers rose. There are no surviving large wild herbivores.

From the 1960s onward, whole farms were bought up by state and private forestry and planted, mostly with Sitka spruce (Picea sitchensis). Some areas have also been drowned for reservoirs.

Most of the large unafforested areas of the Elenydd are now designated as a Natura 2000 site. Debates about overgrazing by sheep must now, after decoupling, give way to the formulation of a positive message for hill farming. What systems should be encouraged; what stocking densities are appropriate?