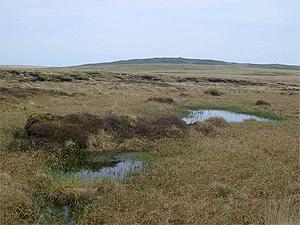 A large area of the Elenydd is designated for its blanket bogs (Annex I habitat 7130). Used for centuries as the main source of fuel, they are now under threat from airborne pollution, heavy grazing, the use of ATVs and burning. Also present, but limited in their extent, are European dry heaths (habitat 4030). Alongside ling and bell heather (Calluna vulgaris, Erica cinerea) are bilberry (Vaccinium myrtillus), crowberry (Empetrum nigrum) and, a Welsh speciality, dwarf gorse (Ulex gallii). 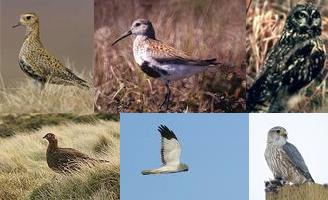 The Elenydd supports a small, and in many cases dwindling, population of upland birds - merlin (Falco columbarius); peregrine (Falco peregrinus); hen harrier (Circus cyaneus); short-eared owl (Asio flammeus); red grouse (Lagopus lagopus scoticus); dunlin (Calidris alpina); golden plover (Pluvialis apricaria) and ring ouzel (Turdus torquatus). Black grouse (Lyrurus tetrix), formerly frequent, are thought to have disappeared within the last twenty years. Part of the massif is designated an SPA, in part for merlin and peregrine. Persecution is not a major factor in the decline, suggesting that habitat change is likely to be responsible. 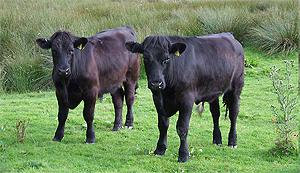 The economy of the Welsh uplands was formerly dominated by cattle. Droving to the markets of London and the rest of southern England lasted until the coming of the railways. Surviving records for the outlined area - Fforest yr Esgob (the Bishop’s forest) indicate that it supported 240 cattle on 800(?) ha. This is a stocking rate of at least 0.3 LU/ha in cattle alone. When cattle were finally overtaken by sheep in terms of numbers is far from clear, but by the 1970s there were effectively no cattle on the hills. This trend has been reversed, as the photo shows, but numbers are still very low. If they are to have substantial beneficial impacts on the vegetation structure and composition, support mechanisms have to recognise the significant extra labour their management requires. 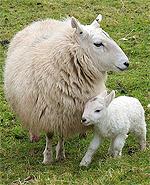 Large-scale sheep ranching has a long history in the Elenydd - it is said to have been introduced by Cistercian monks from the abbey of Strata Florida, founded around 1164. In the early 20th century, sheep densities of up to 0.35 LU/ha were found in the area covered by the photo. These increased with the advent of hill reseeding and affordable concentrate feeds and did not start to decline until the advent of agri-environment incentives in the 1990s. Sheep are selective grazers, but the extent to which the lack of species-diversity in the upland swards will be addressed by flock reductions or a more seasonal grazing pattern is not clear. Support payments in upland flocks substantially exceed the market return, but the link between the payments and farming activity is weak. Red kites depend largely on sheep carcasses, which should however be disposed of through a knackersman according to EU law. 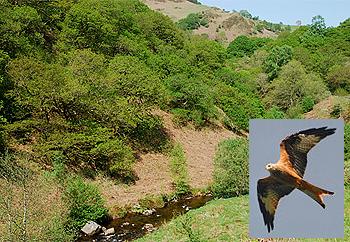 A number of oak woods survive on the steeper slopes on the edge of the upland. They are part of the designated features of the Elenydd SAC (Annex I habitat 91A0) and support rich lower plant communities. The native UK red kite (Milvus milvus) population is thought to have dwindled to one female in this area. Partly thanks to farmers in the area safeguarding nests, the kite is now common throughout mid Wales and a major tourist attraction. Other typical birds are redstart (Phoenicurus phoenicurus), pied flycatcher (Ficedula hypoleuca) and wood warbler (Phylloscopus sibliatrix), all of whose UK strongholds are in these Welsh oak woods. Regeneration is impeded by grazing livestock in most woods. 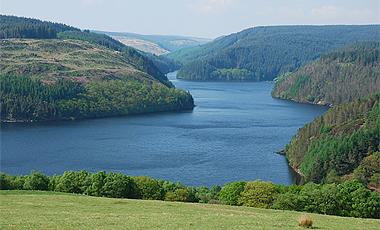 The clean waters of the Elenydd have been used to supply water to the population of Birmingham since 1904. Although the immediate vicinity of the Elan reservoirs were afforested to keep stock away from the lakes themselves, the rest of the catchment remains as the largest continuous area of unenclosed land in mid Wales. The Brianne reservoir (pictured) was constructed in 1972 to control the flow in the Tywi, from which water for Swansea is abstracted downstream. Significant areas of oak woods were drowned. 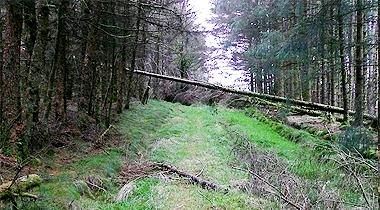 The biggest and most damaging change to land use in historic times is the large-scale planting of conifers (mostly Sitka spruce Picea sitchensis), which took off in the 1960s. The forestry splits the upland into two separate blocks, is implicated in the acidification of local rivers, and was created by massive destruction of semi-natural habitats. Although an important habitat for the newly-arrived goshawk (Accipiter gentilis), the plantations are a symbol of failure to value upland habitats as recently as the 1980s. 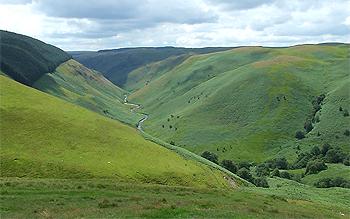 The uplands have a very long history of settlement. Our knowledge is limited by the absence of deeds before 1536, but for example Fforest yr Esgob is recorded as having 15 settlements in the 14th century. Cwm Doethie, see here, had at least 28 houses at the turn of the 19th century. By the 1950s, none were permanently occupied, although now one is lived in once more. Some of these holdings had arable land - barley is recorded from the early 20th century - and all would have cut hay, including poor crops of ‘mountain hay’. The horse was use for shepherding and had its own maintenance needs. The last century has seen a great simplification of both livestock type and of land use. It is likely that future ‘extensive management’ will be unlike seen historically. 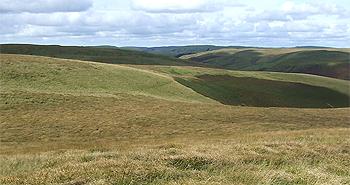 Most of the Elenydd is species-poor acid grassland. Two species dominate - Nardus stricta on the dry land and Molinia caerulea on the wetter ground. Both are of low palatability and the deciduous Molinia in particular is only edible by cattle and horses for a very short time in the spring. It seems clear that the loss of cattle in particular has led to an increase in Molinia but it is not clear to what extent these grasslands would be more species-rich if stocking mixes and densities were to be changed. It became fashionable to consider upland grassland as degraded heather (Calluna, Erica) moorland and to work toward re-establishing the latter. Now that decoupling has removed much of the incentive for putting any stock on the mountain, a more positive message - even one advocating change - and one that has money to match must be found for upland farming. 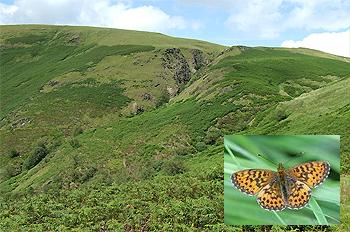 The name Nant Iwrch - Stream of the Roe Deer (Capreolus capreolus) - is a reminder of the large wild herbivores which formerly grazed here but which have been extirpated for many hundreds of years. Domestic livestock are thus the major factor in vegetation composition and structure and it is likely that changes in the mix of livestock have had a considerable effect. Bracken (Pteridium aquilinum) is known to become more dominant in the absence of cattle, though its extent may reflect the previous distribution of woodland. While it is an important habitat for the small pearl-bordered fritillary butterfly (Boloria selene), it often now overwhelms steeper slopes in the Elenydd.