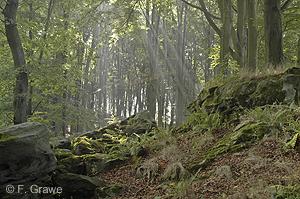 Some of the most important habitat types in the Black Forest are – not at all surprising – different deciduous and coniferous forests (e.g. montane beech and fir communities). Owing to the high grazing pressure and the huge demand for timber and fuel for charcoal and glass production, the forests we see today only came into existence in the beginning of the 19th century. 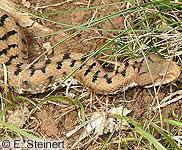 The geographic range of Vipera aspis (aspic or asp viper) only just extends to Germany. The small and highly isolated population in the southeastern Black Forest is the only one in the entire country. This poisonous snake inhabits specific habitats on sunny, warm slopes with a high proportion of rocks or scree (disused quarries) and solitary bushes or trees.

The whinchat (Saxicola rubetra) has one of its last remaining strongholds in the federal state in the southern Black Forest. It breeds on grassland sites with a habitat diversity up to a height of 1.000 m.

Important habitat elements are vertical structures such as fencing poles or umbelliferous plants. They are required as perching sites and for marking breeding territories.

The red kite (Milvus milvus) is an endemic bird species of Western Europe classified as Near Threatened (NT). About 50 % of the known breeding population live in Germany. It requires broad-leaved or mixed old-growth woodlands as nesting sites and exclusively hunts and scavenges in agricultural lands. Low-intensity land-use and HNV-farmland greatly improve the quality of foraging areas and therefore survival rate etc. For example, since the German reunification the abundance of red kite in the eastern parts has dropped by up to 30 %.

The high nature value of the Black Forest grasslands and heaths are the consequences of the land-use dynamic and exploitive nature of the former pastoral production system. Continuing nutrient depletion combined with the stochastic management of minute land parcels lead to a multitude of habitats for species with very different requirements. These habitats have been maintained until today by communal grazing rights being exercised in a traditional way (see picture), although they are under a lot of pressure from recent agricultural policy developments (SFP, biofuels etc.). 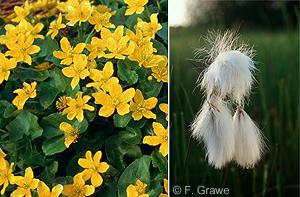 The often steep and rocky slopes of the Black Forest commons also contain many springs and small mires. 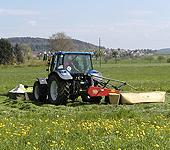 Even though from the production point of view, the conditions for agriculture are very poor, land-use in SW Germany hardly has the romantic touch we can experience in CEE countries. Landmanagers, who mostly work part-time, have to rely on modern machinery. 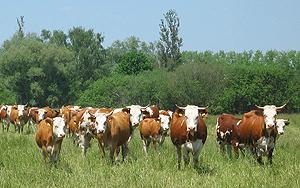 After suffering a heavy decline in livestock numbers in the 1970ies and 1980ies the Black Forest Hinterwald cattle has been recovering in recent years. Events such as the beginning of the grazing season in late spring and the return of the cattle to the farms in early autumn are celebrated with tourists and customers. They play an important role within the concept of regional marketing of high value meat.