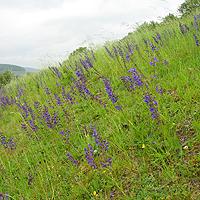 Grassland systems in marginal and unproductive areas of Germany have been under pressure from abandonment and afforestation for several decades. Recent drops in dairy cattle numbers have led to further problems for the preservation of species-rich meadows – still common in SW Germany. Today, riding horses play an important role in mitigating these effects. Due to their large numbers in suburban areas they have created a totally new market for high quality hay – derived from extensive meadows. Furthermore, with appropriate management, extensive horse-grazing can substitute for the traditional mowing regime with only minor loss to the floristic diversity (Wagner & Luick 2005).

Today, being a full-time shepherd offers very little attraction: solitude, hard labour, growing bureaucracy and comparatively poor income. In particular, the switch from headage payments to an area-based approach has worsened the situation considerably, since a lot of the land grazed is not eligible for support. Therefore, in the entire state of Baden-Württemberg only 230 full-time shepherds remain (2002), half of them still practising transhumance. Part-time sheep-keeping in paddocks has become much more widespread. 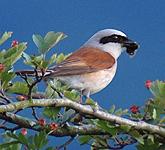 The red-backed shrike (Lanius collurio, Annex I Bird Directive) is one of the characteristic birds of semi-natural grasslands with solitary bushes or adjacent hedgerows, which are needed for perching and as nesting sites. In order to hunt they require good visibility and access to the ground – so a short sward maintained by grazing is beneficial. 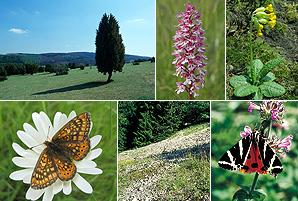 Valley slopes in the Swabian Alb are often characterised by a mosaic of habitat types – many of European importance (protected by the Habitats Directive). While the flat plateaux and upper part are often covered with limestone beech (Natura Code 9150) and Tilio-Acerion forests (9180*), the steepest sections below comprise rocky slopes (8210), scree (8160*) and thermophilic shrub communities rich in orchids. The more open habitat contain semi-natural calcareous and small patches of rupicolous grassland (6210*, 6110), Juniper heaths (5130) and even small calcareous fens and springs (7210*, 7220*). Towards the valley floor, one can find extensive meadows (6510) and orchards. 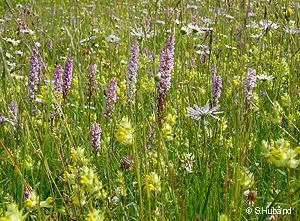 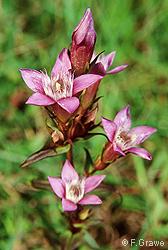 The Chiltern Gentian (Gentianella germanica) – a characteristic plant of semi-natural chalk grasslands. Listed in the German Red Data Book and probably under further threat due to climate change.

HNV Farmland is not restricted to semi-natural grasslands and accompanying festures like hedges or solitary trees. On shallow limestone soils, low-intensity arable fields provide important habitats for highly endangered weeds (e.g. Summer pheasant’s-eye – Adonis aestivalis). Furthermore, they serve as refuge and good foraging sites for declining farmland birds (Partridge – Perdix perdix). The picture shows Forking larkspur (Consolida regalis). The protection of these field margins has in the past been targeted by special agri-envrironmental measures. They remain threatened by intensification or abandonment.