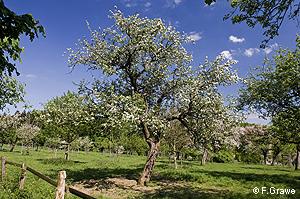 Traditionally, most villages in the south-west were encircled by gardens and extensive orchards. Even today, these orchards yield high-quality and locally marketed products like cider (“most”) and different types of fruit brandy (“Obstler”, “Schnaps”). They are important nesting sites for several endangered birds, like the Annex I species Collared flycatcher (Ficedula albicollis), Wryneck (Jynx torquilla) or Little owl (Athene noctua). Unfortunately, they are also under a lot of pressure, for example, from urban and infrastructure development.

Both Eagle owl (Bubo bubo) and Peregrine falcon (Falco peregrinus) came close to extinction in Germany in the 1970s. Large quarries and the many inaccessible cliffs of the Alb region provided some of the last safe nesting sites. Today, after several decades of thorough conservation work, both populations in Germany are deemed secure.

The spectacular cliff faces of the Alb attract rock climbers and holidaymakers. 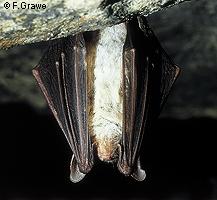 The Swabian Alb is a karst landscape with over 2500 known caves. Many are important wintering sites for bats, like the threatened Greater mouse-eared bat (Myotis myotis). 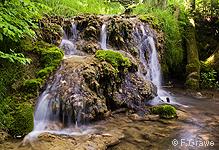 Due to the geology, the Swabian Alb harbours a multitude of springs and many other typical karst features like sinkholes, dry valleys or disappearing streams. 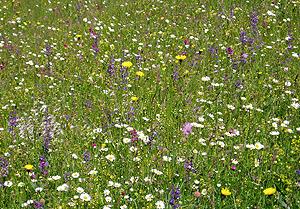 Together with the Juniper heaths, species-rich meadows on dry, alkaline soils (“Mähder”, “Blumenwiesen”) are the most important grassland habitat on the Alb from a conservation perspective. Only lightly fertilised and mown once or twice per year, they have a very rich floristic diversity.
The meadows only came into existence in the 19th century, when housing of livestock and division of the commons created the need for winter fodder.

The most characteristic habitat type of the Swabian Alb are the Juniper heathlands (“Wacholderheiden”) with plants like Silver thistle (Carlina acaulis). In contrast to many other regions in Germany with chalk grasslands, the extensive grazing regime in the south-west has been more continuous leading to well managed habitats of very high nature value.
Shown here is Mount Ipf – an isolated projection in the north-east of the high Alb plateau. As well as its spectacular appearance and its valuable juniper heath, it has an important archaeological site. The hill fort on the summit has evidence of settlements as early as the Bronze age (1200 BC).
This aerial overview highlights the problems of this mountainous region where High Nature Value Farmland and natural habitats (deciduous forests, streams, springs, caves) rich in biodiversity have to coexist with densely populated and highly developed areas.