HNV farming is in decline 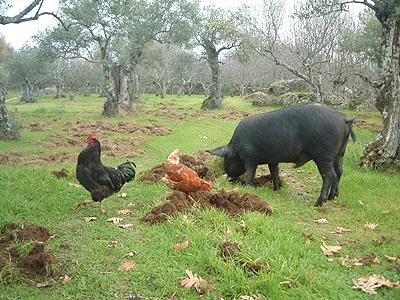 Low-intensity, HNV farming faces enormous challenges of socio-economic viability. As intensive farming expands and increases its yields, and as incomes rise in the wider economy, it becomes harder to earn a living from HNV farming. Across vast areas of the EU’s most fragile rural landscapes, HNV farming faces stark choices between abandonment and intensification. Every day, farmers are giving up and selling their stock. Landscapes rich in biodiversity and culture, beneficial for soil conservation and climate change, and resistant to forest fires, are being lost to scrub, dense forest or new intensive uses, such as irrigated cropping.

The main reason is the insufficient income generated by low-intensity farming on generally poor land. The situation is compounded by the relatively small support received from the CAP, compared with more intensive farming on better land, and by CAP subsidies for afforestation and new intensive landuses, such as irrigated crops.

The central objective of the HNV concept is to shift support in favour of low-intensity farming across extensive areas of landscape. This does not require highly sophisticated excercises of mapping and indicators.

We know that the most widespread HNV farming involves low-intensity livestock raising, with semi-natural pasture as an important part of the forage resource. Directing support to this type of farming is not complicated. In the past, the CAP included a payment for extensive beef farming. In order to qualify for this support, a farm had to comply with a stocking density threshold, which was determined by farm-level data on stock numbers and forage area.

There was no need for a delimitation of “eligible areas” for the Beef Extensification scheme. Payments were simply made to farms meeting the eligibility criteria. The main failing of the scheme was that the stocking threshold was too high to be relevant for HNV farming. A similar payment system could be used now to support HNV livestock farming across the EU (for example, at less than 0.2 LU/ha). Article 69 is a suitable mechanism for re-directing part of the existing CAP Pillar 1 regimes in this way.

In addition to a broad system of support payments, there is a need for payments targeted at particular activities that are central to HNV farming. One example is shepherding. This is essential to HNV farming in many parts of southern and eastern Europe in particular, but the cost of shepherds threatens the viability of the farming system. In some countries (e.g. Bulgaria), support for shepherding is provided through agri-environment payments in certain areas. Such support needs to be made much more widespread, through Article 69, through a supplement to LFA payments, or through simple and wide-ranging agri-environment schemes.

Finally, there is a need for investment aid, advice and technical support to be closely targeted on HNV farms. Blanket grant and advisory schemes, as implemented under many RDPs, are of little benefit to HNV farms. They may even have negative effects, as more better-capitalised farms on more productive land absorb the available support, and compete more strongly with low-intensity farms.

One way to ensure close targeting on the farms of most nature value and greatest socio-economic need is through local schemes, as illustrated by pilot projects such as BurrenLIFE in Ireland (www.burrenlife.com). This approach could be targeted on Natura 2000 sites, using the model of Local Action Groups involving farmers.

The poor socio-economic situation of HNV farming means that support measures are needed urgently, and should be set up as quickly as possible. The support needs can be summarised as: