Wet grasslands of the Carmarthenshire coalfield

Coal mining is first recorded on Mynydd Mawr (the Great Mountain or Moorland) as early as 1669, and there were also iron mines in those early days. So by the time of the Inclosure of the common in 1813, it was already an industrial area. Indeed, the method of inclosure, into a large number of small ‘lots’ rather than a small number of more efficient farms, suggests that landowners were looking to extract rents from a population of mining smallholders. This land holding structure is partially responsible for both the persistence of semi-natural pasture in the area and for many of the uncertainties which face this landscape in the early 21st century.

With a large proportion of its fields under wet ‘rhos’ grassland with devil’s bit scabious Succissa pratensis, the area supports a metapopulation of the marsh fritillary butterfly Euphydryas aurinia. Some of the fields have been designated as an SAC for this species and a Butterfly Conservation project is aiming to encourage suitable management.

Possibly a reminder of the time when hundreds of pit ponies worked underground, many of the fields are used for keeping horses. Traditionally not considered ‘agriculture’ by the State, their owners are frequently not claiming any CAP schemes and their motivations are different from those of many more ‘conventional’ farmers. Financial incentives may be inadequate to change management practice and owners with just one field pose particular difficulties.

Whereas in the past the small holdings of Mynydd Mawr provided a valuable supplement to mine work in good times and a semi-subsistence insurance in the bad, nowadays most landowners are not active farmers.
Those without horses of their own may allow grazing by local farmers. Agreements may be verbal or short-term. Grazing systems on these wet grasslands are economically marginal, and if farmers can’t get written contracts, they cannot claim CAP payments. For agri-environment support those agreements need to be for at least 5 years long. 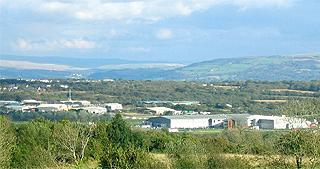 Returns from agriculture and CAP payments are low and getting them involves considerable bureaucracy. In contrast, the land potentially has a high development value, whether for housing or for industrial development. In common with the rest of the coalfield, the area receives ‘Convergence’ support as one of the most deprived parts of the EU. Although the agri-environment regulations can potentially be linked to any income forgone, up until now this has been interpreted to mean agricultural income