Our Devon project was based on case studies in four areas  the Blackdown Hills, South Devon, the Culm measures and Dartmoor.

In phase 1 the project aimed to clarify what is HNV farmland, where it is, and how much there is, in the case-study areas. Local experts considered the farmland of most value for biodiversity to be a matrix of unimproved grassland and semi-improved grassland interspersed with features such as large hedges and copses.

In South Devon specifically, certain arable and mixed landscapes farmed in a particular way (e.g. winter stubbles, spring cereals) and with thick hedges and patches of scrub are also considered HNV. This was mainly (but not exclusively) because of their importance for the Cirl bunting (Emberiza cirlus), a species of conservation concern in England confined to this part of the country.

There was a consensus among the project team that the habitats and sites currently prioritised for conservation at national and county levels fall far short of capturing the full area of this HNV farmland.

The project found that approaches trialled at EU and national levels based on existing data bases do not allow a robust identification of HNV farmland in the Devon case-study areas. National habitats inventories include only Biodiversity Action Plan priority habitats, and these do not represent the total extent of HNV farmland. Also the data may be inconsistent and out of date. Species data are not sufficiently consistent either geographically or across taxa, and the spatial resolution is too crude in most cases. Data on farming characteristics are either not available, or not at a sufficient spatial resolution.

Landcover data are potentially the most useful, but are not available at sufficiently high resolution. The 2007 version of Landcover UK will be at a much higher resolution than the current version and may be useful for identifying HNV farmland, but it was not available at the time of the project. 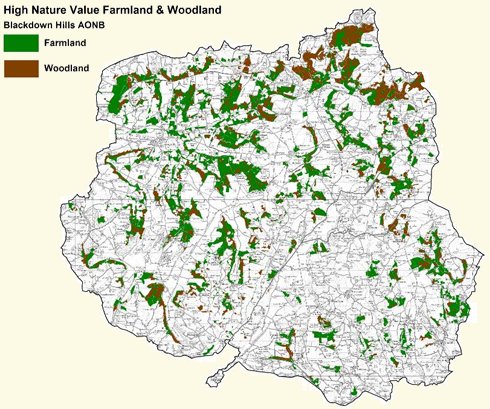 Under phase 2, the case studies analysed the characteristics of farming on the HNV baseline area, and the tendencies and challenges of this farming from the perspective of maintaining nature values. This analysis showed the very high income dependence on CAP payments (Pillar 1 and agri-environment) especially of farms with a high proportion of HNV farmland. Also noted was a tendency for HNV farmland to be sold off to new landowners with non-farming backgrounds.

The final stage of the project assessed how current policies can be improved to ensure that nature values are maintained on farmland within the HNV baseline areas. As in the rest of Europe, the main cause of decline in HNV farmland is a parallel process of intensification on land with more production potential, and abandonment of land with production limitations. In Devon this is typically happening at the scale of individual fields rather than entire landscapes. Nevertheless, the result is an inexorable loss of a type of farmland that is especially rich in biodiversity and whose presence in the wider farmed landscape is essential for many species, including pollinators.