Integrating biodiversity in CAP.
What strategy for change in the face of powerful status quo players? 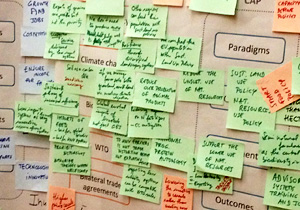 2012 has marked the start of a collaboration between EFNCP and IDDRI project on biodiversity integration in the CAP. The background of the project is the general failure of the CAP and other EU policies to conserve biodiversity, despite the formal strategies that have been proposed for more than a decade, and the recognition that the CAP is a key sectorial policy to be addressed, as one of the paramount drivers of change in EU wide biodiversity. 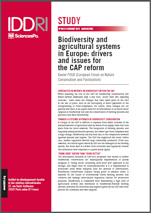 The partners consider that there is a need not only to make the CAP "greener" (e.g., by introducing some new mechanisms for the environment, through increased resource efficiency, for instance), but genuinely to address biodiversity objectives through more profound policy changes.

In particular this would include the conservation of farmed semi-natural habitats by consistently targeting payments towards low input farming systems (HNV) and providing incentives for the environmental adaptation of more intensive systems to benefit biodiversity.

Seen in this light, the coming CAP for 2014-2020 is already a missed opportunity in terms of its overall content. This development falls into a longer historic pattern, as outlined in a background report on the macro-economics of the CAP, prepared by Xavier Poux. 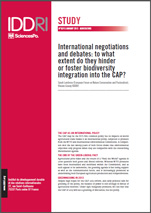 In this context, it also seemed useful to have a good understanding of the impact of international arguments and negotiations, as they are frequently identified as factors influencing the integration of biodiversity in the CAP, positively or negatively. This international context was the subject of a second background report, by Sarah Lumbroso and Viviane Gravey.

Given this short-term picture, the partners are therefore looking further into the future, anticipating the strategic room for manoeuvre in the coming years. IDDRI and EFNCP co-organised a workshop in Brussels to examine the options, which involved a limited number of invited actors who are genuinely concerned with biodiversity issues in the context of the CAP.

The objectives of the workshop were: 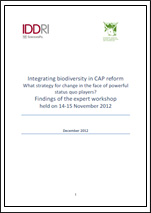 The findings of the workshop are summarized as below and given in more detail in a report.

The workshop recognised that the dominant narrative is being used to hamper any progress towards biodiversity. This narrative creates an opposition between biodiversity conservation and the need to feed the world and it influences not only the design and justification of the CAP but, more generally, other related EU policies such as research and innovation. One output of the workshop was a coherent alternative narrative, able to combine international constraints and concerns with a holistic approach to biodiversity conservation in Europe.

The workshop addressed another issue: which agrarian systems are needed for biodiversity conservation? While the discussions reaffirmed the core role of HNV agrarian systems in this perspective - whose loss in the coming decades would be irreplaceable - it also emphasised on the need to have biodiversity requirements for the whole range of EU agrarian systems, including the intensive ones. For the latter, a combination of semi-natural vegetation land-use and agroecology practices should be core requirements. Another key finding was that innovation needs to be fostered in extensive areas - a radical change from the current "innovate for sustainability in harmful farming systems on the one hand; pay for the maintenance of extensive endangered agrarian systems on the other" vision. Change and biodiversity are needed in all EU agrarian systems.

The workshop then addressed the policy needs in order to achieve biodiversity integration. Radical changes for the CAP were identified, starting with giving a clear priority to HNV systems. But other EU policies which have a significant impact were also recognised and discussed: for example, those shaping the economic development of the entire food chain (hygiene, genetic resources rules, etc.), environmental policies (with possible contradictory signals being given by energy and biodiversity policies) and research and innovation. The policy approach should be holistic.

The final discussions addressed the strategic perspectives - how can biodiversity actors promote the better integration of biodiversity and agricultural policies. A short term strategy includes continuing to assess and reveal the negative impacts of CAP and mainstream agricultural development on biodiversity, undermining the green-washing dominant narrative. Discussions also addressed the fundamental position of environmental NGOs: should they continue to play a role in the CAP reform process, defending the principle of such a policy in order to make it significantly better? Or, on the contrary, should they take it for granted that the CAP cannot be reformed and that another environmental policy, based on new foundations, should be promoted to replace it? The pros and cons of both options have been discussed.

Taking the long view, the discussions concluded on the need to design multifunctionnal scenarios, encompassing biodiversity and socio-economic perspective. Combining the outlooks from agroecology and high nature value appeared as a promising starting point for such an enterprise.